The Virtus European Summer Games 2022 were officially declared open today in Cracow, Poland at the WKS Wawel stadium. This is the second edition of the Virtus European Regional Games hosted by Virtus Polish member SPRAWNI-RAZEM .

The ceremony began at 18:00 CEST on 17 July and was attended by the Mayor of the Royal City of Cracow, Jacek Majchrowski, who took the honorary patronage over the 2nd Virtus European Summer Games. 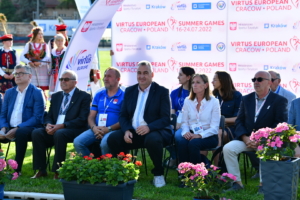 Expressing her excitement for the games, the President of the Republic of Poland – Paulina Malinowska-Kowalczyk said, “The 2022 Virtus Summer Games, Cracow dedicated to athletes with an intellectual impairment will gather nearly 600 players from over 18 countries who will compete in nine disciplines. So, it is going to be an extraordinary celebration of sports. I am very pleased that this group will also include medalists from the Tokyo 2020 Paralympic Games.” 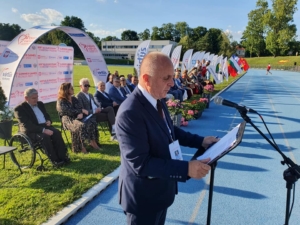 “We were very excited to win the bid to host the 2022 European Summer Games in Poland in 2018, but we did not foresee the Covid-19 pandemic and the terrible war beyond our eastern border. Despite many adversities, with a huge organisational effort, we managed to prepare such a large event. Thank you to everyone who accepted our invitation to take part in the event.” said Mr. Dariusz Mosakowski, President of SPRAWNI-RAZEM.

Addressing the crowd, Virtus President, Marc Truffaut said,  “The first edition of the European Games was in Paris, France in 2018 and it’s a pleasure for me to be here in Cracow, Poland for the 2nd edition. Four years ago we opened the way to the regional games and this year we have two regional games – in Cracow, Poland for the European region and in Brisbane, Australia for the Oceania-Asia region, and I think it’s all because of our fantastic athletes and the dedicated volunteers and member organisation.”

“I would like to thank the host member- SPRAWNI-RAZEM and the people of Poland for hosting us all for the game.”

The event is taking place from 16 to 24 July. The championship will be attended by representatives of eighteen countries from the European region including Belgium, Bulgaria, Czech Republic, Denmark, Estonia, Finland, France, Greece, Iceland, Israel, Italy, Poland, Portugal, Spain, Sweden, and Turkey who will compete across nine sports. Invited athletes from Australia will compete in the Tennis event and athletes from Ecuador will join in the Cycling event.

The nine sports on offer are athletics, swimming, table tennis, basketball, handball, tennis, cycling, rowing, and badminton, a new discipline in the Virtus competition calendar. The competitions will be organized at the sports facilities of the city of Cracow – WKS Wawel Stadium, KS Cracovia 100th Anniversary Hall with the Disabled Sports Center, KS Bronowianka sports hall, Sports and Recreation Center Kolna, and the AWF Cracow Swimming Pool. Cycling, on the other hand, will take place near Kraków in the Niepołomice Forest.

Media coverage for the championship will be provided by TVP Sport, TVP3 Cracow and Parasportowcy.pl.

Five things to know about the 2022 Virtus European Games

Six World Records from Spanish swimmers on Day 1 of 2022 VESG
Scroll to top
We use cookies on our website to give you the most relevant experience by remembering your preferences and repeat visits. By clicking “Accept”, you consent to the use of ALL the cookies.
Cookie SettingsAccept
Manage consent