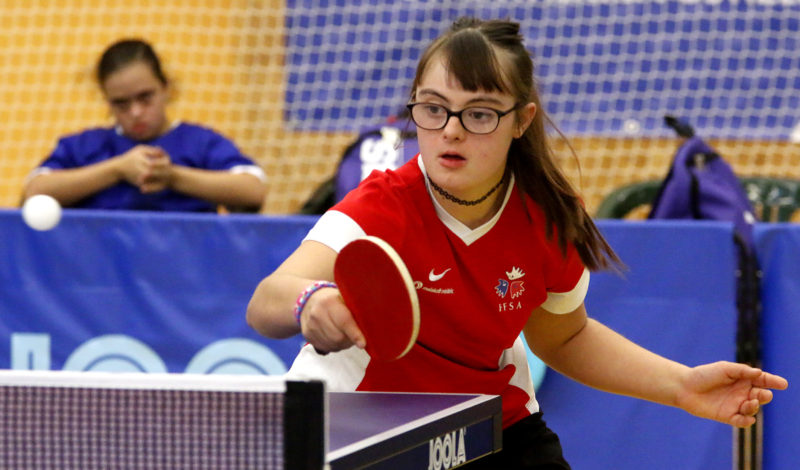 For the Paralympic sports of swimming, athletics and table tennis, eligibility is the first stage any athlete with an intellectual impairment must go through to compete. The relevant International Federation will then guide athletes through sports classification – this establishes whether the impairment has an impact on sports performance. More information about classification is available here.

There are currently three eligibility groups within Virtus competition:

II1 – for athletes with an intellectual disability

This is the original eligibility group for athletes with intellectual impairments and is included (in some sports) in the Paralympic Games. Athletes compete in swimming, athletics and table tennis in S14, T/F20 and class 11 respectively.

The eligibility criteria is based upon the World Health Organisation and American Association on Intellectual and Developmental Disabilities (AAIDD) research and guidance, and in simple terms the criteria state that an athlete must show:

Athletes in the II1 group have certain challenges to overcome during competition. These include pacing during a race, tactics, and fine adjustments such as take-off points in jumping events.

For II1 athletes, there are two levels of eligibility. Athletes should consult with their Member organisation carefully to identify which level they should apply for.

II2 – for athletes with an intellectual disability and significant additional impairment

The II2 was introduced to reflect the variety of impairments that can accompany an intellectual impairment and ensure fairer competition.

Autism or Autism Spectrum Disorder (ASD) as it is now commonly known, is defined by WHO as a group of complex brain development disorders situated on a continuum of severity. These are characterised by difficulties in social interaction and communication and restricted and repetitive interests and activities.

Awareness of autism and ASD is growing across the world in both adults and children. Around 60-70 per cent of children who are diagnosed with autism are also diagnosed with intellectual impairments. However, some people do not have intellectual impairments, and this condition was previously referred to as Asperger’s syndrome, or is sometimes called high functioning autism.

This new group has been developed by Virtus to provide life-changing opportunities and to enable those people with autism and no intellectual impairment to compete at the highest levels.

The eligibility criteria for II3 is:

Virtus will be monitoring and evaluating the new eligibility groups over time to refine and develop the criteria. It reserves the right to amend or remove the eligibility criteria at any time. The new criteria are specific to World Intellectual Impairment Sport competition only.

Athletes wishing to apply for athlete eligibility should first contact their National Member Organisation. Applications will not be accepted unless they are submitted through, and endorsed by, a member organisation.

Athletes must appear on the Master List no later than the final entry deadline of the competition for which the athlete is considering entry (these dates can be found on the events page).

Please note that there is no ‘guest’ entry to events.

National Eligibility Officers are responsible for managing the eligibility process at a member organisation level. All World Intellectual Impairment Sport Members should register their NEO.

The NEO must be a qualified psychologist, and must not be the person conducting assessments. The NEO should review the athlete eligibility application form and all accompanying reports before it is submitted to Virtus. This is to ensure it meets the requirements set out in the application guidance notes.