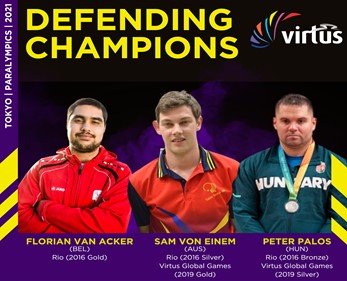 In the second day of competition at the Tokyo 2020 Paralympic Games, 7th ranked player Takashi Takemori of Japan, gave a tough fight to the Rio 2016 Gold medallist, Florian Von Acker (Belgium). Both players entertained the crowd with powerful smashes, before Florian went on to win the match 3-2.

Meanwhile the Rio 2016 Bronze medallist, Peter Palos from Hungary, is in his best form of his career and stands at No. 1 in the International Table Tennis Federation (ITTF) ranking going into Tokyo.

Interestingly, while majority of the athletes expressed the hardship they faced during the Covid-19 lockdown, Palos expressed different emotions. “Fortunately, I did not miss out on my practice during the lockdown like others, as my club was open. There were league going on and I was able to compete. I think this is a big advantage for me” says Palos.

He was also relieved with live spectators not being present to cheer the host nations players. “I miss the crowd when I am playing with competitors from other countries but today, when I was playing against Koya Kato from Japan, I did not miss the crowd because obviously the home crowd would have supported him which would have put pressure on me” says Palos. He considers Florian and Takashi to be his strongest competitors.

On the other hand, Australian player, Sam Von Einem was excited to win today’s match and stay on top of his group. “I have been working as hard as possible. There were no international tournaments but I did what I could and it is great to be here.”

The last round of Qualifications continue on Day 3, then it’s straight onto the Men’s Quarter Finals in the night. Who will be the final eight?

Swimmers Reece Dunn and Valeriia Shabalina doubled their Gold tally
Scroll to top
We use cookies on our website to give you the most relevant experience by remembering your preferences and repeat visits. By clicking “Accept”, you consent to the use of ALL the cookies.
Cookie SettingsAccept
Manage consent