On the first day of competition at the 2020 Paralympic Games, in the Women’s 100m Butterfly S14, Shabalina Valeriia (WR) broke her own WR of 1:03.68 and set a new one for 1:03.59sec. Talking to Virtus, Shabalina says “My hands and legs were shivering just before the event and I was very stressed because it was the most important event of my life, but my coach helped me stay calm. I am happy with my performance now.”

Silver medal winner with a timing of 1:05.48 sec, Paige Leonhardt from Australia said “personally I didn’t execute what I wanted to during the heats, so I really wanted to have a really good and strong race, and that’s what I did and came back with a silver medal. I also got to share the podium with Ruby and I am very proud of her.”

Ruby Storm (AUS) claimed the bronze with a timing of 1:06.50sec. “It was very unexpected, I came third in the heats and was really shocked about that and I came away with a Bronze medal” said the swimmer.

A thrilling start was seen when three swimmers Liam Schluter from AUS in heat 1, Gabriel Bandeira (BRA) heat-2 and Reece Dunn (GBR) recorded Paralympic records in their respective heats but the Brazilian made it to the top of the podium. 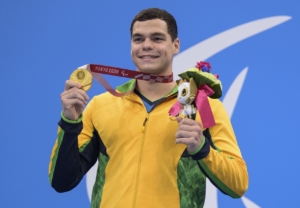 Bandeira says “I feel so happy, I trained a lot for this day. In the morning I controlled through the race (heat) and in the finals I just gave it all. I was quite nervous as I wrote down on paper- ‘I will swim very fast’ which helped me a lot.”

World record holder-Reece Dunn had to face defeat and settle for Silver with the timing of 55.99sec while Australian swimmer Benjamin James Hance claimed the bronze with 56.90sec.

Although, Lawrence Sapp from USA could not make it to the podium, the athlete was very excited to make his Paralympic debut. He lead the race until 50m but finished fifth.

Meanwhile Dai Tokarin, the host nation’s champion, ranked second in the World and was expected to give a strong competition to the WR holder Reece Dunn, but was left heartbroken when he could not qualify for the 100m Butterfly Finals with the timing of 58.44sec.

Table Tennis heats up Tokyo Metropolitan Gymnasium
Scroll to top
We use cookies on our website to give you the most relevant experience by remembering your preferences and repeat visits. By clicking “Accept”, you consent to the use of ALL the cookies.
Cookie SettingsAccept
Manage consent