Another busy and exciting day at the Tokyo Aquatics and Tokyo Metropolitan Gymnasium with finals and quarterfinal events taking place at the respective venues.

In Swimming, the Paralympic debut maker- Reece Dunn from Great Britain is becoming quite a sensation at the pool in S14 category. 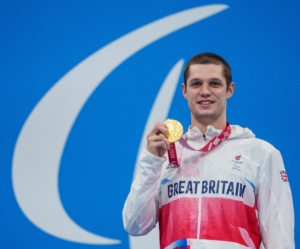 Dunn not only won his second Gold medal at Tokyo 2020 Paralympic Games, he also set a new World Record in 200m Freestyle 1:52.40sec in a neck to neck race with – Gabriel Bandeira Silver (1:52.74sec) from Brazil. Viacheslav Emeliantsev from RPC settled for Bronze by timing 1:55.58sec.

In Women’s category, Valeriia Shabalina (PRC) claimed her second Gold at pool winning the title for S14 200m Freestyle by clocking 2:03.71sec, beating the former Paralympic champion from Great Britain- Bethany Firth who settled for Silver with a timing of 2:03.99sec. Team GBR also took home the Bronze with swimmer and Virtus ambassador, Jessica-Jane Applegate finishing with a time of 2:09.53sec.

In Table Tennis, an extremely thrilling match was seen between Hungarian player Peter Palos and host nation’s ‘Wild Horse’ Asano Takashi. Long rallies of aggressive smashes were delivered by the Japanese player across the table, which were returned gently by the Hungarian. After a nerve wrecking fight Peter secured his place in the semi-finals with 3-2 game. “I feel very tired, the match was very exhausting and I feel so good after winning the match” says the bronze medallist from Rio 2016, Peter Palos. 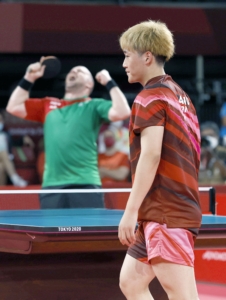 Japan’s Asano says he is very sorry to all the people who supported him. “My target was to win a Gold medal this time but could not do so. The opponent (Palos) is like a king in the world of Para Table-Tennis, he won Gold in London, Bronze in Rio so he is very strong and has a very good mental strength. I promise to win a Gold in Paris 2024” says Asano.

On another table, Cuesta Martinez from Spain was seen putting pressure on Sam von Einem from Australia in the initial rounds but the Aussie had a smooth win eventually and moved into quarterfinals with a score of 3-1.

In the third match, Lucas Creange (FRA) stayed undefeated by Takashi Takemori (JPN) and qualified into the semi-finals with a flat win with 3-0 points.

The defending Champion from Rio, Florian vanAcker (BEL)  faced some difficult moves from the Chang Gi Kim, from Korea in the first and third match. However, with the score of 3-1, the Belgian player moved also moves into the Semi-finals.

The Semi-Final matches for both Women’s and Men’s Category will be played tomorrow. Remember to follow Virtus on Social media for regular updates.

Humidity affects the game for van Acker
Scroll to top
We use cookies on our website to give you the most relevant experience by remembering your preferences and repeat visits. By clicking “Accept”, you consent to the use of ALL the cookies.
Cookie SettingsAccept
Manage consent