On Day-1 of the Athletics competition at the 2022 Virtus OA Games taking place at the Queensland Sport & Athletics Centre, many debutant athletes scripted history by winning first-ever medal for their country. 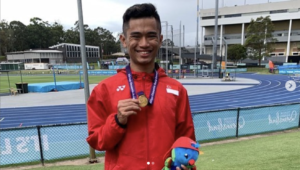 Mohammad Bin Yakub added the first medal- Gold to the tally for Singapore at the games. Yakub clocked a timing of 11.59sec in II1 Men’s 100m finals. Coming second was New Zealand’s Josh lush, who also scripted history by opening the medal tally for his country.

In II1 men’s Javelin throw, Hassan Deghani from Iran claimed Gold for his country Iran by covering a distance of 40.17m. In the same event, Cosmol Maefolia representing Soloman Island brought their first Silver medal. He covered a distance of 31.14m.

“I feel very very happy for being the first athlete to win a medal for my country,” said Cosmol.

In II2 Men’s 100m, Fiji’s Wise Togotogorua, who debuted in Virtus events today, won the Bronze for his country. Fiji is a new member nation of Virtus.

The powerhouse Japan has broken three records already in the pool.

Anku Matsuda from Japan smashed the Para World Record in Men’s II1 200m Butterfly yesterday at the 2022 Virtus OA Games with a time of 2:08.45sec.

Storming towards the end with a timing of 4:05.97sec, their counterparts did the same in the Men’s II1 4x100m Medley relay set new Virtus World Record.

Here is a highlight video from Day-2 of the OA games.

Highlight stories from Day-3 of 2022 Oceania Asia Games
Scroll to top
We use cookies on our website to give you the most relevant experience by remembering your preferences and repeat visits. By clicking “Accept”, you consent to the use of ALL the cookies.
Cookie SettingsAccept
Manage consent