What a successful start for the host nation at the 2022 Virtus OA Games today at both the Road Cycling competition at RACQ Mobility Centre and in Rowing at the Queensland State Rowing Centre.

With a clean swipe of the podium, Georgia POWNING, Montana WHITELEY and Molly THATCHER took a whole set of medals from Australia from the Women’s II1 6Km race.

In II1 Men’s 10Km race, Australia’s Cameron MARSHALL thrashed his opponents with a timing of 16:47.31sec and took the Gold. Haruki OTANI from Japan came second, interrupting the trio win of medals for the host nation, with a timing of 17:38.85sec. And, Harry MEZGER from Australia took the final podium spot.

In the Mixed II1 12Km Teams event, Australian cyclists continued to add more medals to the tally. Nathan BROEREN and Georgia POWNING representing ‘The BP Express’ put another Gold to Australia’s medal bag followed by the ‘Whiteley Aussies’ consisting of Jamieson WHITELEY and Montana WHITELEY with Silver followed by Molly THATCHER and Oliver HUTCHISON with the Bronze.

In Men’s II1 20Km teams, ‘A & H Earthquake’ (Andre ASCUI and Harry MEZGER) and ‘The Brovvers’ (Carlo MANOLITSAS and Finn HARVEY) won another Gold and Silver respectively for Australia while the ‘International’ team with Neel Yadav from India and Haruki OTANI from Japan grabbed the final podium place.

Team Australia dominated the podium in all Rowing events. With breathtaking performance, Australian women took another set of medals in the II1 2000m Women’s race where J.Story, B.Marshall and S.Walker with a timing of 7:51.88sec, 8:14.85sec and 8:50.77sec claimed the Gold, Silver and Bronze respectively. 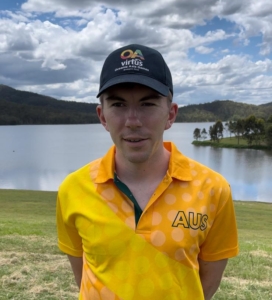 “It’s been a very exciting day. I had two races and I both the races. In the global games in 2019, I got 7 gold all on the water then I got 2 silver and 1 bronze all on the erg which is a rowing machine indoors. I have more rowing later in the week so hopefully, I can get more medals in those.”

Mac is aiming for 8 medals from all his 8 events at the OA Games. In the II1 Mixed 2x 500m race, Australia’s S.Walker and Mac Russell lost the Gold to L.Webber and A.Skinner by just 6sec and claimed the second spot.

Here is a video with the highlights of Day 1 of 2022 Virtus OA Games.

The event schedule can be accessed here.

Full results for rowing can be accessed on the Rowing Queensland website and for Cycling from the AUSCYCLING website.

Live-Stream links can be accessed from OA Games Youtube channel.

Japanese swimmers sets four new records set on Day 2 of OA Games
Scroll to top
We use cookies on our website to give you the most relevant experience by remembering your preferences and repeat visits. By clicking “Accept”, you consent to the use of ALL the cookies.
Cookie SettingsAccept
Manage consent