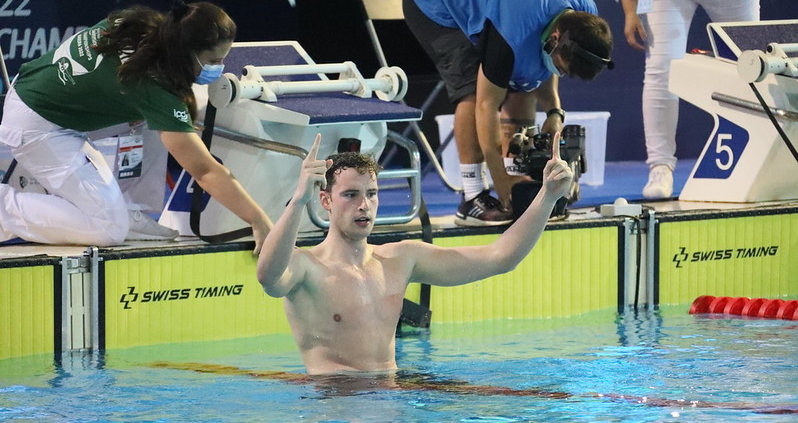 On day-2, the audience witnessed thrilling races at the finals of S-14 100m Backstroke.

World record holder from Australia, Benjamin Hance had a sensational swim in S14 Men’s 100m Backstroke breaking the championship record twice in one day. Keeping his performance at top notch, Hance stayed ahead of all the swimmers from the very beginning and had a smooth win with 57.34secs (CR), breaking his previous record which he broke during the qualifying heats in the morning (57.77sec). 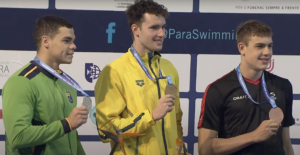 Gabriel Bandeira (BRA) tried to catch up with Benjamin but could not beat last years’ Paralympic Champion and settled for Silver with a timing of 59.86sec.

There was a tough fight between Vasyl Krainyk from Ukraine and Alexander Hillhouse from Denmark but it was the 18 year old Danish swimmer who grabbed the final spot on the podium with a timing of 1:00.32sec.

Another clean sweep of medals was done by the women from Great Britain.

While the audience was hooked up on the fastest swimmer from the heats – Poppy Maskill (GBR) who was competing in her first World Championship, Bethany Firth was a very experienced player to defeat in her favourite event. 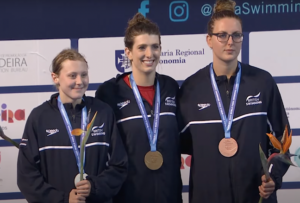 The three time Paralympic Champion – Bethany took the Gold with a time of 1:06.96sec while Maskill touched the finish line at 1:07.59sec and was delighted to take Silver with her from her first World Championship.

Soares de Oliveira from Brazil tried to challenge Jessica-Jane for the bronze in the last 25m but Jessica took bronze just by a margin of 0:00.48sec.

Yamaguchi breaks Championship record two times in 100m Breaststroke
Scroll to top
We use cookies on our website to give you the most relevant experience by remembering your preferences and repeat visits. By clicking “Accept”, you consent to the use of ALL the cookies.
Cookie SettingsAccept
Manage consent