With a total of eight athletes, team Bulgaria participated in their first event ever at the 2022 Virtus European Summer Games.

“It is a perfect moment for me because I have won my first medal which is also my country’s first medal.”

Angelova dedicated her medal to her coach. 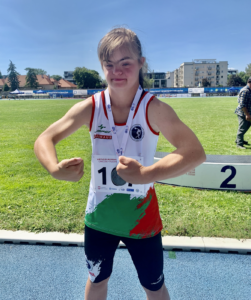 Angelova celebrating after her win

Talking to Virtus, the Bulgarian coach expressed how special the medal is,  not just for the athlete, but also for the entire country.

“I feel very proud of my athletes today. They were participating for the first time so we didn’t have any expectations but Angelova made me extremely happy with her result. Virtus competitions are all about elite performance and our athletes were not that good. For about eight years we have been trying to improve their performance and they finally qualified for the Virtus European Games.”

“It was a very long journey for us and this is something very big for Bulgaria and it will motivate all the athletes back there to push their limits, improve their performance and give a new start for the elite performance sports back in the country,” the team coach said.

II2 is a class for athletes with an intellectual disability and additional functional impairment.

Nathan Maillet from France broke the World record in 100m Freestyle mens with a timing of 53.74secs. Talking to Virtus, the swimmer mentioned his strategy for his race. 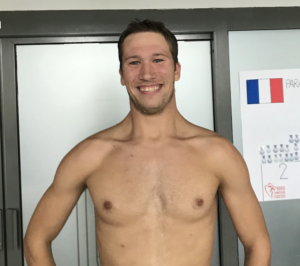 “When we arrived there, I had a staff at my service and, in fact, we established a major strategy with Bertrand Sebire, national coach. The strategy was that I go unnoticed compared to other swimmers. I correctly followed my strategy and that’s how I was able to break the world record. For me, it was crazy and frankly, I still have trouble believing that I actually did it.”

It was another thrilling day for the Spanish swimming team on the second day of the 2022 Virtus European Summer Games.

Both Women’s II-1 and Men’s II-1 relay team from Spain broke two more records in Men’s and Women’s 4x100m Medley Relay event. They clocked a time of 5:06.62secs and 4:18.44ecs to set the new records respectively.

The full results can be accessed from here.

It’s a World Record but not my personal best
Scroll to top
We use cookies on our website to give you the most relevant experience by remembering your preferences and repeat visits. By clicking “Accept”, you consent to the use of ALL the cookies.
Cookie SettingsAccept
Manage consent