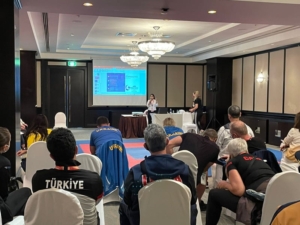 The World Para-Karate Championship took place in Dubai from 18th to 22nd November.

It was the first Para-Karate championship endorsed by Virtus after the MOU with World Karate Federation (WKF) was signed in 2020.

The initial days of the championship were packed with classifications of athletes and coaching sessions for para-coaches.

On 20th November, WKF in collaboration with Virtus hosted the first training session for the para-karate coaches on the eligibility and classification of athletes with intellectual impairments. The session was attended by coaches from over 40 nations and was a grand success.

Two categories for athletes with an Intellectual Impairment, K21 (II1) and K22 (II2) for both male and female were offered in the competition, where a total of 30 athletes participated. 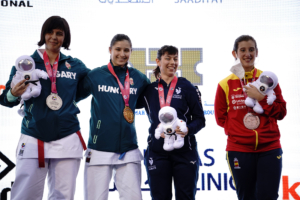 Hungarian karatekas dominated the podium as they grabbed the first two spots. Gold medal winner Olivia Kakosy said “I feel very happy. Me and my coach were practicing five days a week including both physical and technical training, performed lot of repetition for Kata. I am very satisfied with my results” .

Petra Karpati (HUN) claimed the Silver. The Hungarian team coach was seen celebrating the results behind the stage.

Talking to Virtus, the team coach says “We are very happy to be here and we were feeling very proud to see two Hungarians in the finals, it was like a national celebration. I am very proud of my students. This championship was very important for us amidst this Covid-19 pandemic to keep the spirit of competition alive. The next World Championship is in Budapest, so we will practice a lot to show our talent in front of the Hungarian crowd.” 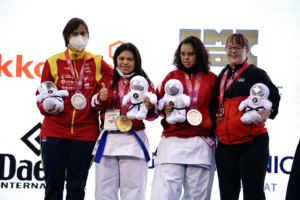 “I am very happy, I want everyone to be happy with me because I am going to win again hundred times in the future,” Salma told Virtus.

Grabbing the Silver place was Leon Lopez from Spain followed by Nadin Youssef (EGY) and Natalie Olson (CAN) who settled for the Bronze. 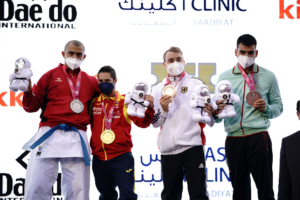 Ruiz Carlos Huertas from Spain stayed undefeated and surfaced as the champion of this class. Moustafa

Talking to Virtus, Moustafa’s mother said “I am very happy. Moustafa was very close to be the winner but I am still happy that he got silver. We started taking him for the Karate practice since he was five years old. We found very good coaches there and everyone in the coaching centre supported and helped him al lot to be a champion today.”

Albert Singer from Germany and Antonio Pereira from Portugal settled for the Bronze medals and were seen celebrating their success with their respective teams. 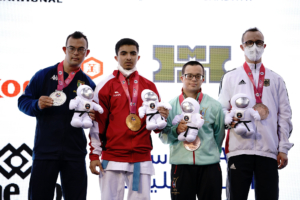 Once again the Egyptians stayed on top of the podium as Ahmed Elbeltagy grabbed the Gold. Finishing at the second place was Mattia Allesina from Italy.

“It’s a big big pleasure for me to win my first medal. The Egyptian player was very strong, but it’s okay, we got the second place so I am happy“, Mattia tells Virtus.

Azevedo Joao (POR) and Marvin Noeltge (GER) were awarded the Bronze medals in this category.

Gold Coast to host first Para Sailing World Championships in 2022
Scroll to top
We use cookies on our website to give you the most relevant experience by remembering your preferences and repeat visits. By clicking “Accept”, you consent to the use of ALL the cookies.
Cookie SettingsAccept
Manage consent