Five new members were welcomed to the Virtus family on 5th June during the Federations General Assembly.

National Member Organisations for Latvia and Bulgaria were joined by the International Federations World Karate and EDGA (golf). Meanwhile in the National Federation category, Shinshidokan-Kai was approved (Pakistan).

Zane Skujina- representing Latvia was present in the assembly and was very excited to be part of Virtus. 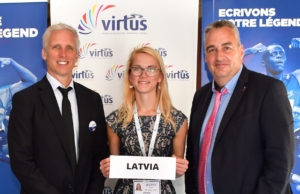 “Joining Virtus Sport is a big stepping stone for the Latvian Paralympic committee and the people with intellectual impairment in Latvia. Over the years we had people, who were interested in sports for people with II, but we could only offer them local sports communities, without any chance of getting to be an elite-level athletes. Now, being a Virtus member opens so many doors not only for inclusion but also for elite sports. We are happy to be a part of the Virtus family and looking forward to develop sports community for people with intellectual impairment.” says Ms. Skujina.

With World Para-Karate Federation becoming one of Virtus new member and considering the success athletes with intellectual impairments (K21 and K22 class) had in 2021 World Para-Karate Championship in Dubai, Virtus have now decided to include Karate in the upcoming 2023 Global Games in Vichy as a full medal event. 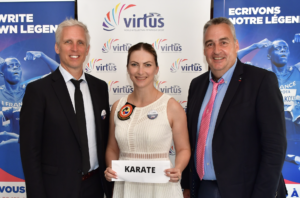 “To be a full Virtus member is a step forward in our intention to maximize opportunities in the development of Karate for people with intellectual impairment.” says Ms. Dušana Čierna Augustovičová from World Para-Karate federation.

“I am so glad the Virtus Governing Board included para-karate classes K21 and K22 into the program of the Virtus Global Games. It is the signature event for elite athletes with intellectual impairments to compete in the highest level, international multi-sport” elite competition. It is exciting because it is also the pathway to the Paralympics in several disciplines.”

Virtus President- Marc Truffaut says, “We are very delighted to welcome new members onboard with us and with their support, we will be nurturing new talents into elite sports for athletes with an intellectual impairment”

With the addition of new national members, Virtus now has 95 member organisations, the largest in the history of the organisation.

New Championship Record for Bandeira at Madeira 2022
Scroll to top
We use cookies on our website to give you the most relevant experience by remembering your preferences and repeat visits. By clicking “Accept”, you consent to the use of ALL the cookies.
Cookie SettingsAccept
Manage consent