Intellectual impairment is an invisible disability which makes it difficult for people to understand the problems people who are affected by it have in their daily life.

Imagine spending hours and days learning a particular skill today and forgetting how to perform it tomorrow, or not being able to tell people that you forgot what they told you a few hours ago. Maybe its difficult to understand or fill out a simple form without getting help from someone else. These are just a few issues athletes with intellectual impairment might face each day.

Whilst athletes with physical or sensory impairments are often able to communicate and make people understand what they need help with, people with an intellectual impairment often find it more difficult to communicate problems, to share their feelings or ask for help, which can affect their performance.

Virtus Ambassador and Paralympic champion, Jessica-Jane Applegate has been advocating and raising awareness of intellectual impairment for more than a decade now. Jessica was diagnosed with Asperger’s syndrome – a form of autism – when she was in secondary school. Talking to various newspapers and TV channels, Jessica-Jane shared her daily struggles on many occasions. She shared how she really struggles with day-to-day things such as understanding training sets, reading sessions, reading a pace clock and remembering technique.

‘I forget what I’d learned to do the day before and I have poor concentration. I forget equipment or misplace it and cannot always communicate well. This is why I am in the classification of S14 (swimmer with an intellectual impairment) and race against the other S14s. We all have the same problems.’

“I get confused and frustrated easily but it works both ways. Sometimes I’m frustrated because I can’t explain what I mean and other times I have no idea what people are trying to tell me. This affects me on a daily basis and I am very lucky to have such a supportive team around me.”

Applegate added: “I and my mum are really close. We do loads of stuff together and she does so much for me. From all the driving, my website, my bookings, my paperwork, my race entries, everything really. I love her, my dogs and my geckos so much.”

Jessica was born with several underdevelopments, the main one was a tube in the larynx where she was very sick with breathing problems for several years. One of her legs is shorter than the other one and it also has a hole in the bone, and the athlete already had many surgeries on that leg since she was a child.

“Jess has had lots of operations on her feet. Throughout her whole childhood and adulthood, she has had many surgeries. Literally, nine weeks before competing in Rio, she had throat surgery. Several weeks before the London Paralympics she had surgery. It has just been her whole life. We don’t know any different. When you are in that environment, and you see it that way, you get used to it and I wouldn’t want to change her for anything” Jessica’s mother – Dawn Applegate told IPC.

She also has femoral retroversion and all of these additional health conditions make training harder for the swimmer to train. 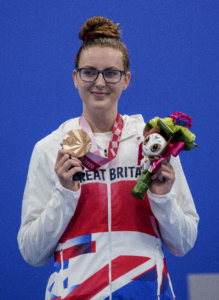 “I have femoral retroversion (positional deformity) in just one hip so I have really struggled to
do the breaststroke technique as it has to be simultaneous. And with uneven legs, one hip that turns in when the other doesn’t, restricted movement in my dorsiflex (bending the foot upwards) but hypermobility (large range of movement) in my ankle, it’s been a huge challenge.”

Jessica considers her coach Alex Pinniger as a father figure to her, who not only trains her but also ensure that they stay connected pre and post-events. She said, “Most of the time Alex and I get on brilliantly. He always says he doesn’t get stressed but he does – he just won’t admit it, ha! Sometimes we argue but we always talk things through. He is very understanding.’

“My whole pool training and gym schedule is a set routine which then leads to everything else being a routine.

“I have a race plan which my coach and I will go through over and over again until I remember it and I also have some prompt cards made up just to remind me of what I should be doing.”

Fighting and surviving through all the adversities in her life, Jessica has already won two gold, two silver and three bronze at the Paralympic Games and 38 international medals altogether, but she says she is not done yet.

Virtus Ambassador Neel Yadav
Scroll to top
We use cookies on our website to give you the most relevant experience by remembering your preferences and repeat visits. By clicking “Accept”, you consent to the use of ALL the cookies.
Cookie SettingsAccept
Manage consent