The inaugural event in Athletics for athletes with an Intellectual Impairment was pushed off today. It was a very exciting day at the Olympic Stadium where
Ecuadorian sisters dominated the F20 Shot Put field.

Poleth Isamar Mendez Sanchez (ECU) set a new World Record to take GOLD at Tokyo 2020, by covering a distance of 14.39m in her second Paralympic Games. She had finished fifth in Rio 2016.

“I am very happy to win this Gold,” Poleth said. 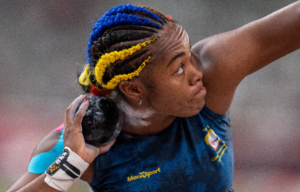 “I was very excited to compete alongside my sister, in the event she was my competitor and not my sister but in between the event I was also giving her advice on how to win.”

The Gold medal winner was doubly happy because her sister, Anais Mendez, in her debut to Paralympic Games, was competing in the same event. The newbie, Anais, won the Bronze with 14.06m distance.

Anais Mandez stated, she was very happy and very proud because she didn’t think she was going to win this medal. Having each other during the event, was a warm and supportive feeling for the Anais amidst the pandemic. Both women were seen engaging in short conversations between their events.

“We both are going to dance and celebrate our achievement tonight.” said Anais

Meanwhile, Ukrainian athlete Anastasiia Mysnyk made a hattrick with the Paralympic Silver medal. Anastasiia had won Silver in Rio 2016 and London 2012. She covered a distance of 14.16m. Speaking to Virtus, the athlete expressed how hard it has been to train during the Covid-19.

“I am very happy with the Silver. Me and my coach were working together on this and both are pleased with the result,” said Anastasiia.

“It was really difficult to train during the lockdown due to Covid-19.”

“I was training at home. Sometimes we had to go to the field or forest to train.”

The athletes have positive messages to share with young athletes with intellectual impairment.

The Ecuadorian duo, sisters Poleth, and Anais, says “Never give up, you need to keep fighting and never give up.”

Anastasiia’s message is “In this (COVID) situation, don’t be afraid. Try to get out of home and practice but don’t hurt yourself. Everything will be fine.”

That wraps up day 5. Tomorrow we see more athletics action from Tokyo Olympic Stadium. Follow Virtus on Socials to stay up to date.

Day 6: Games debutants light up the track
Scroll to top
We use cookies on our website to give you the most relevant experience by remembering your preferences and repeat visits. By clicking “Accept”, you consent to the use of ALL the cookies.
Cookie SettingsAccept
Manage consent