Besides the temperature in the city of Cracow, what else is rising? The performance of Virtus athletes!!

The French relay team toppled the previous Virtus World record by clocking 1:42.62secs. Maillet Nathan, Blaise Simon, Daniel Matthys and Meny Jordan had been practising relay together since 2016 and they were thrilled with their achievement today.

“It’s our first time breaking a world record and we are really happy as well as surprised! It’s a wonderful moment for all of us,” said Meny Jordan.

“I was the finisher and I’m very happy because I beat my previous record. I was very surprised when I finished the race because not only did we win the Gold, we broke the world record!” Daniel Matthys added. 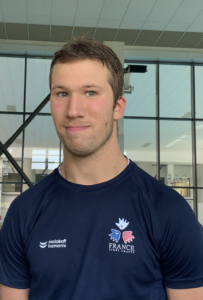 The relay race was particularly special for Nathan as he broke two records in the same race – the relay record and an individual event record.

While trying to do the best for his team as the starter, Nathan swam the best 50m freestyle race under pressure and cracked the Virtus World Record for men’s II1 50m Freestyle.

“The strategy for any relay race is to take a lead in the first 50m. So I was just trying to swim as fast as I can for my team and I’m surprised to break the world record. I am filled with joy.”

Spanish swimmers finish with a blaze

“After breaking the records yesterday, I believe the girls gained much spirit and confidence which helped them create this new record”,  the Spanish team coach Celia mentioned.

It’s a World Record but not my personal best

Portuguese team takes the trophy home in Basketball
Scroll to top
We use cookies on our website to give you the most relevant experience by remembering your preferences and repeat visits. By clicking “Accept”, you consent to the use of ALL the cookies.
Cookie SettingsAccept
Manage consent