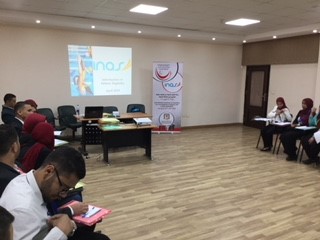 Professor Jan Burn MBE, World Intellectual Impairment Sport Head of Eligibility, delivered the session to train the group in the basics, including an introduction to the organisation, the differences between eligibility and classification, how World Intellectual Impairment Sport defines its criteria for athletes and the process for registering competitors.

The National Eligibility Officer (NEO), Hoda Mohamedy, also joined the workshop which saw both qualified and trainee psychologists attend. Each World Intellectual Impairment Sport member must have an NEO who is responsible for ensuring that athletes meet the eligibility criteria before an application is submitted to the World Intellectual Impairment Sport Eligibility Panel. They must be a qualified psychologist and are supported by a group of other professionals.

“I really enjoyed working with the Egyptian psychologists, they were very enthusiastic to learn about the eligibility processes and how they can ensure that they implement robust systems,” Burns said. “They were particularly keen to learn about the new groups (II2 and II3) and how athletes with Down syndrome can be included. It was also encouraging that so many psychologists in training wanted to get involved in this early stage of their career.

“The attendees of the workshop feedback was that they enjoyed the event and now felt much more knowledgeable.”

The II2 and II3 groups are for athletes with a more significant impairment and for athletes with high-functioning autism, respectively. World Intellectual Impairment Sport introduced these groups in 2017, both as trials, which will continue into the future while further research is carried out.

Art and culture mix with business with pleasure

“The facilities and arrangements were excellent, so many thanks to ESFID and the rest of the team,” Burns continued. “The workshop was one of a number of events happening as part of the 2nd Awladna International Forum for Arts of the Gifted, which had 30 nations attending, so it was fantastic to see so many people with disabilities from around the world, and their art.”

Basketball Australia names head coaches for 2019 World Intellectual Impairment...
Scroll to top
We use cookies on our website to give you the most relevant experience by remembering your preferences and repeat visits. By clicking “Accept”, you consent to the use of ALL the cookies.
Cookie SettingsAccept
Manage consent