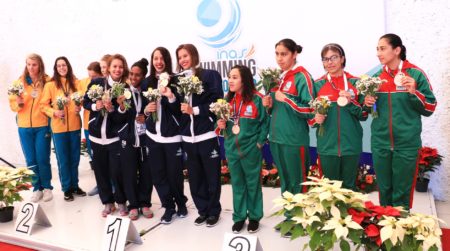 Debora Borges Carneiro, Stephanie Ariodante, Beatriz Borges Carneiro and Ana Karolina Soares (4:30.19) dominated the race in Aguascalientes, Mexico. They shaved more than one second off the previous record of 4:31.68.

There was also a new World Intellectual Impairment Sport record in the mixed 4x100m medley relay S14. As it was the first time the event has been run at this level, Brazil’s winning time of 4:41.59 lays down the marker for the rest of the world.

Just three-tenths of a second separated gold and silver in the women’s 50m backstroke S14.

Australia’s Lucy defends title at 2017 World Intellectual Impairment Sport... Day three finals set to be close at World Intellectual Impairment Sport Swimming...
Scroll to top
We use cookies on our website to give you the most relevant experience by remembering your preferences and repeat visits. By clicking “Accept”, you consent to the use of ALL the cookies.
Cookie SettingsAccept
Manage consent