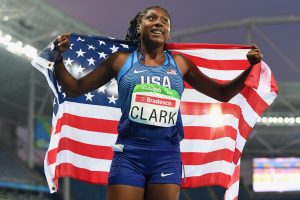 The event is the first major gathering of international stars since the Rio 2016 Paralympic Games where athletes set a staggering 69 world records.

Big names set to line-up on the track for hosts Great Britain include Jonnie Peacock, Hannah Cockroft, Richard Whitehead and Georgina Hermitage, who between them have won 13 world and 11 Paralympic titles.

In the field British medal hopes lie with four-time world champion Aled Davies, and Paralympic champions Joanna Butterfield and Hollie Arnold. In the F20 category for athletes with intellectual impairments, Sabrina Fortune will get to experience the roar of a home crowd as the women’s shot put Rio 2016 bronze medallist.

Craig Spence, the International Paralympic Committee’s Director of Media and Communications, said: “London 2017 is promising to be the best World Para Athletics Championships to date with athletes continuing their outstanding from last September’s Paralympic Games.

“Already this year we have seen many of the sport’s leading stars in record breaking form and I expect many more to records fall during 10 days of exhilarating competition.

“Following the phenomenal success of London 2012, the iconic London stadium holds a very special place in the heart of many Para athletes, many of whom will be eager to defend or win world titles in the British capital. The action is not to be missed, so we’re glad to be showing all 54 hours of coverage via our website.”

All morning and evening sessions will be streamed live during the event and expert commentary will be provided by Will Downing and Tulsen Tollett. German Paralympic long jump champion Vanessa Low will join the pair to provide in-depth analysis.

In addition to live streaming all 54 hours of coverage, and providing daily highlights and clips of all races and events, live results will also be provided here.

*Please note the coverage will be geoblocked in certain territories.

Udine prepares for half marathon Euros

Entry deadlines approach for World Championships US launches search for equestrians with an intellectual impairment
Scroll to top
We use cookies on our website to give you the most relevant experience by remembering your preferences and repeat visits. By clicking “Accept”, you consent to the use of ALL the cookies.
Cookie SettingsAccept
Manage consent