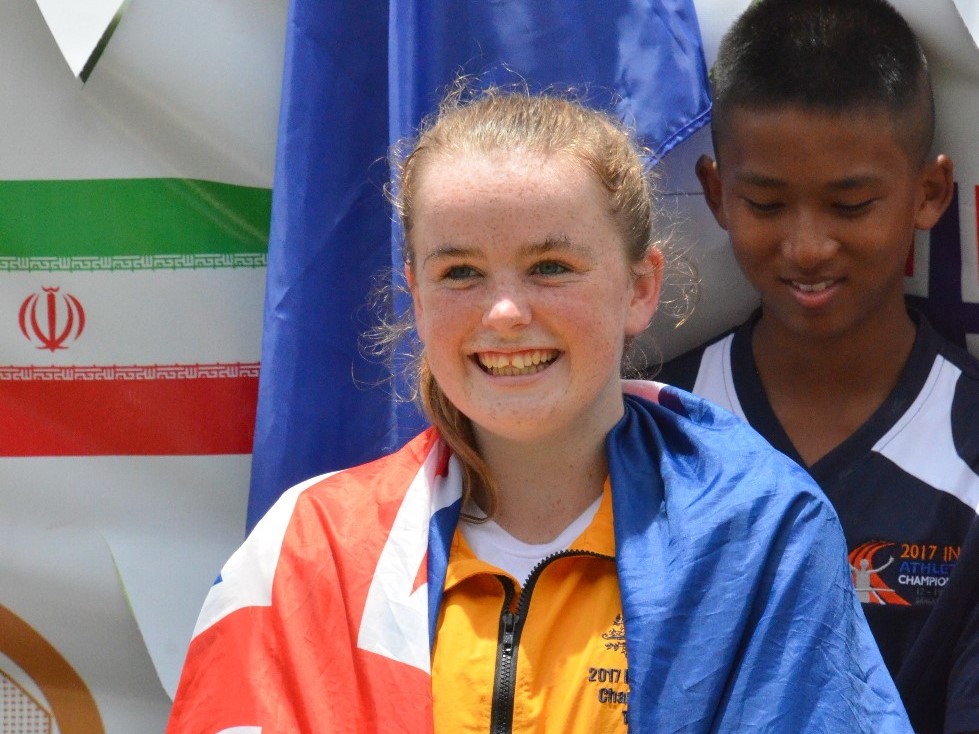 To people who do not know her better, Australia’s Caytlyn Sharp, with her love for music by 5 Seconds of Summer and complaints about mandatory attendance at school, would seem like any other 16-year-old.

But peek beyond the surface and another side emerges: a champion athlete who advocates passionately for equality.

In 2018 Sharp became an International Federation for Athletes with Intellectual Impairments (World Intellectual Impairment Sport) #WeAreSport ambassador. This role required Sharp to set-up Facebook, Twitter and Instagram accounts and use them to promote her life as an athlete. The aim was to show other women and girls like Sharp that they too could become elite athletes.

Those accounts have inspired and given several girls the initial nudge to compete and thrive in para-athletics.

“I saw something in them and helped them do a couple of events with me first,” Sharp said. “Soon, some were competing at the district level, state and even, nationals. They said it was the best experience of their high-school.”

Sharp began swimming when she was eight and later transitioned to athletics. Within no time in 2017, aged just 14, Sharp represented Australia for the first time at the World Intellectual Impairment Sport Athletics Championships in Bangkok, Thailand.

“It was noisy and hard to understand people because everyone spoke different languages,” Sharp said of her first major competition. “But winning the high jump and standing on the podium with the Australian anthem playing was really good. I couldn’t stop smiling.” Sharp jokes that the photo was taken at the moment when her smile was at its worst, before her mother, Cindy McDougall, corrects her, laughing, “I actually think it’s the best smile in a photo she’s ever had.”

Sharp is looking forward immensely to her home World Intellectual Impairment Sport Global Games in Brisbane from 12- 19 October. She has not been to the city in over ten years, and is thrilled by the prospect of having her great-grandmother watch her compete live.

“She’s actually 86 and I haven’t seen her since I was four or five. I’d love to meet her again and catch up”, Sharp said fondly.

While high jump remains her primary focus, she will also compete in the triple jump and long jump and try out for the 100m and 200m races, “just for fun”. Between now and October, Sharp will be competing in the National Championships in Sydney and several preparatory tournaments at the school, district and regional levels.

An athlete with autism, Sharp often faces problems with crowds, even when they think they are being encouraging. Loud cheers, the sound of clapping and people calling out her name disrupt her rhythm and make it difficult for her to focus before a race. “But they’re normally all right once I signal them to stop”, she said.

“They think I’m dumb and talk to me really slowly, often in a baby-voice or with hand actions!”

But things are steadily getting better. Sharp trains four days a week in Warrnambool with a group of able-bodied athletes and with them, she is always smiling and laughing, even after grueling training sessions. “They all understand me and I love training with them”, she said.

Sharp credits her best friend, Dayna Crees, who competes in long jump and has cerebral palsy, for improving her outlook towards competition and life in general. Referring to Crees, Sharp says, “Though each event drains her physically and mentally, she is always smiling. She always makes it a point to go up and thank everybody, even when she doesn’t win or is feeling angry inside.”

Australian long-jumper, Brooke Stratton, who competed at the Ro 2016 Olympics, has also been a long-time inspiration and mentor to Sharp. Sharp hopes to emulate her idol and compete at the Paris 2024 Paralympics, but she will most likely have to compete in long jump, as neither high jump nor triple jump (Sharp’s preferred competitions) are Paralympic events in the T20 category at the moment.

Through all of this, Sharp has continued her advocacy for Para sports and women in athletics. Her concerted efforts have resulted in the Hampden Specialist School, where she studied previously, starting a comprehensive sport programme allowing students with intellectual impairments to compete in cross-country, swimming and athletics at a state-level.

“I love getting all the women to get out there, have a go and do something in sports,” Sharp said: “They really enjoy it once they try it, and I enjoy seeing them smile.”

Cross-country stars line-up for World Championships
Scroll to top
We use cookies on our website to give you the most relevant experience by remembering your preferences and repeat visits. By clicking “Accept”, you consent to the use of ALL the cookies.
Cookie SettingsAccept
Manage consent