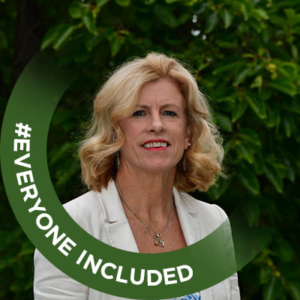 Virtus Vice President Robyn Smith has been elected at the IPC Annual General Assembly, as one of ten IPC Governing Board Member at Large representatives.

The Virtus Governing Board has congratulated Ms. Robyn Smith on this outstanding achievement. Her election continues in the footsteps of Virtus (formerly INAS-FID) founding executive Marie Little OAM who served as the first female Member of the International Paralympic Committee’s Executive Board, from 1993 to 1997.

On behalf of the Virtus Member network across all five regions representing over 80 countries serving more than half a million people, this position on the IPC Governing Board is a positive outcome for the para-sport movement, for athletes with intellectual impairment, and for Virtus.

Virtus President Marc Truffaut said nominating Robyn was something the whole Virtus Board was supportive of and to have a successful outcome is wonderful.

“Congratulations Robyn, your work hard for Virtus and on this campaign, your achievements make us all very proud,” Mr. Truffaut said.

Virtus Secretary-General Barry Holman, who was online for the virtual AGM and voting said it was a close race with Ms. Smith only narrowly missing going through in the first round and garnered the six most votes in a field of 23 highly qualified candidates.

“I witnessed the dedication and effort Robyn put into making the most of this nomination and she truly deserves this seat on the IPC Governing Board,” Mr. Holman said.

“Robyn has always been on a path to find ways to make the world inclusive for people with disability, and now she has the strength of the Paralympic Movement to drive equality.”

Robyn Smith ran a campaign with the slogan #EveryoneIncluded – a call to action that more needs to be done for people with disabilities, and those who are underrepresented or come from marginalised regions, to be included in sports.

“In 2017, I was nominated by Virtus and at that time, it was such an honour to be amongst people in the para-sport movement, that although I didn’t make it, it helped solidify the drive towards better relationships with the IPC and the broader para-sport community,” Ms. Smith said.

“Four years on, there was a global pandemic and a world where more people are aware there is a need to change perceptions and challenge the attitudes towards people with disability being included.”

“I am so honoured to be elected as one of the 12 amazing champions of Para-sport, under the guidance of President Andrew Parsons and Vice President Duane Kale, we will be Stronger Together.”

“Through my campaign, it was not just about what I want to bring to the movement, it was about listening to nations and understanding their needs so that I can be a voice for the collective.”

“Thank you to the Paralympic Movement voting members, for giving me this opportunity to represent all of us.”

“There was also a team of people who helped me during the campaign. Your support, advice and drive, made this moment possible.”

Virtus would like to congratulate all the nominees of these elections and wish the very best to President Andrew Parsons, Vice President Duane Kale, and the ten Members at Large.

Five World records broken at 2021 Virtus Swimming Championships
Scroll to top
We use cookies on our website to give you the most relevant experience by remembering your preferences and repeat visits. By clicking “Accept”, you consent to the use of ALL the cookies.
Cookie SettingsAccept
Manage consent