France’s 73-57 win over Japan saw them strengthen their position at the top of group one with four points. They followed-up on their triumph over Poland in their opening match on Tuesday (21 November).

Japan and Poland, the other two teams in the group, remain without a win.

In the women’s, Australia Gold recorded their third straight win at the Palagarassini Stadium.

They were the victors over the second Australian team, Australia Green.

The Greens kept the Golds contained in the opening few minutes. However Eliza Mills was too much for them to handle, scoring an impressive six points. The final score was 13-1

Earlier that day Australia Green took on France. In what was a low-scoring, physical game, the Greens forced the match into overtime in the final minute before scoring again to decide the 10-1 result.

Jess McCulloch was the top scorer for the Greens with four points. Nicole Harris also had a great game with three points, netting an impressive goal from a seated position after being knocked to the floor.

Men’s teams from Australia, Egypt, Portugal, Poland, Japan and France are competing in Loano. Australia Gold and Green and France make up the women’s competition. 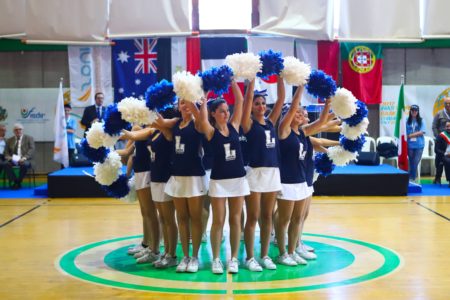 Portugal, 2013 world champions and bronze medallists from 2015, beat newcomers Egypt 100-16 in their opening group two match at the Palagarassini Stadium.

France, 2015 silver medallists, began their campaign with a 64-29 win over Poland in group one.

Earlier in the day an impressive Opening Ceremony saw a packed crowd enjoy performances and speeches from local dignitaries.

In the women’s competition, played in the fast-paced 3×3 format, the Australia Pearls had a busy day.

The country has two teams in the competition – Australia Gold and Australia Green.

After an early flourish from Australia Green that saw them take a 4-0 lead, the Golds settled into the game. Katie Papworth was the team’s top scorer, netting seven points.

Australia Gold then went on to beat France 12-6 in a double-header.

France tried to take advantage of Australia Gold’s plight in a very physical game, but they could not capitalise.

Molly Urquhart-Moran captained her side well, controlling the tempo and scoring at key points. Eliza Mills also starred for Australia, making 100 per cent of her foul shots to break the game open.

Men’s teams from Australia, Egypt, Portugal, Poland, Japan and France are competing in Loano. Australia Gold and Green and France make up the women’s competition.

Australia have dominated the court in recent years and return as the women’s 3×3 champions. Since winning gold at the 2015 World Intellectual Impairment Sport Global Games in Ecuador they have remained No. 1 in the world rankings. Their second team also picked up bronze two years ago.

The world leaders are fielding two teams who will play France in a round robin format. It is hoped that the Championships will help to develop women’s basketball, as well as showcasing the excitement of the 3×3 game.

It will also be the first women’s 3×3 title awarded at a stand-alone World Championships.

In the men’s 5×5, France and Portugal will be looking to capitalise on the absence of 2015 champions Venezuela.

Portugal beat Australia for bronze two years ago, bouncing back slightly from the disappointment of losing the chance to defend their title from 2013. France lost out to Venezuela by more than 20 points in the gold medal match.

“As for our opponents, from what we have observed and the results show, France has been the team that in recent years has shown greater evolution,” Portugal’s coach Alcindo Quaresma said. “We do not know how the other teams will be, but we know from their past that Poland and Australia are always opponents to be taken into account. Japan are already known for their stance to fight to the end in any match and with any opponent, with all the determination and enthusiasm.  “The surprise for us, and total ignorance, is in relation to the team of Egypt, given that it is the first time we will meet.

The Championships are supported by the Executive of the Italian Sports Ministry, the Ligurian region and Loano Municipality.

It will be the fifth edition of the World Championships and the third time top class rowers have travelled to Italy for the event. Also in Gavirate in 2015, Hong Kong dominated the medals table with six podium finishes

Gavirate 2017 is being organised by the A.S.D. Canottieri Gavirate and the Italian Rowing Federation.

Returning to France for the second time, it will be the eighth edition of the World Championships. The organisers are the Fédération Française du Sport Adapté.

“It brings the number of World Championships held this year to 10 across a wide variety of sports. We have also sanctioned and organised a series of other competitions.

“I am sure that rowers and runners will put on a huge show to win coveted world titles and end the year on a high. Our thanks go to the organisers for providing athletes with the perfect stage to reach their best.”

Entries for both World Championships are now open. More information can be found at www.inas.org/events. 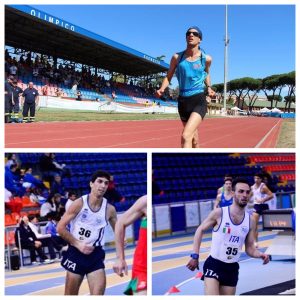 Being held as part of the 18th edition of the prestigious Maratonina Udinese, runners from Italy, Portugal, Spain, Poland and Sweden will also compete. It is the second time the event will be held in Udine following on from 2009.

Tomaiuolo is a bright prospect having only started competitive running two years ago, and he is aiming high.

But the Italians will face Portuguese teammates Paulo Pinheiro and Jose Azevedo, the respective European and world champions.

Azevedo is particularly fired up ahead of the competition as he tries to claim what he considers to be his missing gold.

“This is the title I lack in my career,” he said. “I’m looking forward to the Championships. My main goal is get the podium. I work out every day to give my best. I feel happy [to have Pinheiro as a rival]. There is a good chance of having two places on the podium.”

Another face to watch is Spain’s Asier Aguirre Santos, the bronze medallist from the 2016 World Championships. 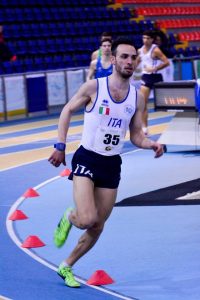 The race, which takes place on Sunday (17 September), will be contested as part of the prestigious Udine Marathon.

Tomaiuolo is hoping to better his sixth place finish from the 2016 World Championships.

“I wish to do better to improve my last World Intellectual Impairment Sport World Championships and to get a medal in the next European Championships,” he said.

But the 22-year-old is aware he will face a stacked field including two Portuguese teammates who enter in great form.

“I think that [European champion Paulo] Pineiro and [world champion Jose] Azevedo at the moment are the top athletes in the world and they are on another level,” Tomaiulo said. “I don’t think I can reach their results, but I’ll try to do my best. I’ll try to run with them and then, in the last 5km, try to sprint.”

For the Italian, the opportunity to run in front of his home fans is something to savor.

A fan of British Olympic champion distance runner Mo Farah, Tomaiuolo has only been running competitively for two years and is a great prospect.  He says that he was attracted to the sport because of “Pain to reach gain”.

“Sport is my life, through it I’m famous in my city and everyone respect me. Without sport, I can’t imagine my future,” he said.

Tomaiuolo will join compatriots Alex Holtz and Fabrizio Vallone on the start line.

Being held as part of the 18th edition of the prestigious Maratonina Udinese, runners from Portugal, Spain, Poland and Sweden will also compete. It is the second time the event will be held in Udine following on from 2009.

Azevedo is the reigning world champion whilst Pinheiro holds the European crown and has medalled at every edition of the competition since 2005.