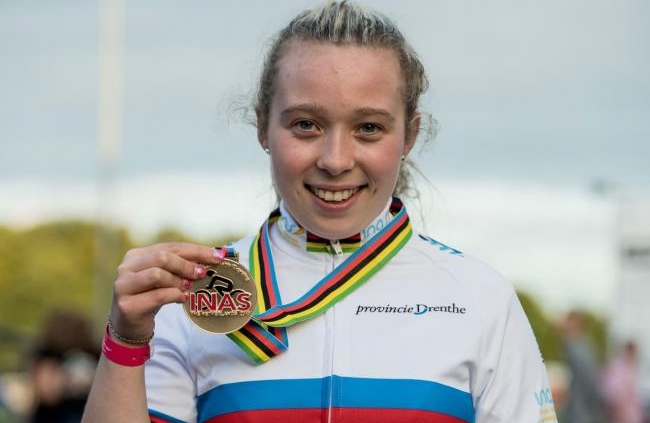 Great Britain’s Kiera Byland is ‘daring to dream’ of multiple medals from both the road and track during the 2019 Global Games in Brisbane, Australia, from 12-19 October.

Byland is the defending women’s time trial and road race world champion, but is also hoping to excel in the team events as well as at the velodrome when track cycling makes its debut.

“I’m excited to be representing Great Britain through UKSA [UK Sports Association, the Virtus: World Intellectual Impairment Sport national member]. For the first time I will be able to compete in the female road team time trial with Lauren [Booth] and do track racing which I’m really looking forward to,” Byland said. “My goal is to be the best that I can be, to try and get some PB’s [personal bests] if I can and anything else will be an added bonus.”

In 2018 Byland grabbed double world gold in Paris, France. But the podium is not her only focus.

“I could say the medals are one of the less important things, what is really precious are the friendships you build through it. Sport definitely gave me an opportunity and changed my life.”

The last couple of years have seen Byland progress her performance and form rapidly. She made her international debut at the worlds in 2017, sealing double gold again and has not looked back.

As part of her rise to the top, the British rider has also used her talents as a platform to inspire other women and people with intellectual impairments.

Byland is now a motivational speaker and gets the chance to address children who might be facing the same challenges as she did as a youngster. The 21-year-old also attends business school but has one eye on a coaching career, maybe transferring her skills into her other sport of swimming.

“When I was younger, back at school, it was really hard for me,” Byland said. “I had problems of bullying, I did not have a big self-confidence. I believe that in these situations people should step in, even a nice gesture can make a huge difference.

“At the beginning it was not easy, I passed from not being able to ride a bike at all to competitions in a very short time. It was something that happened day after day, you gain that awareness you can do it.

“It was not a dream at the beginning, but it became one. Probably we just need to dare to dream sometimes. This is what I say to all the people who are in the situation I was: just dare to dream.”

The 2019 Global Games will feature nearly 1,000 athletes competing in 10 sports, including road and track cycling. Road cycling takes place from 14-15 October ahead of the debut of track cycling on 17 and 19 October.

The Global Games are the world’s biggest high performance sports event for athletes with intellectual impairments.

#Brisbane2019: World’s top track and field stars to line-up
Scroll to top
We use cookies on our website to give you the most relevant experience by remembering your preferences and repeat visits. By clicking “Accept”, you consent to the use of ALL the cookies.
Cookie SettingsAccept
Manage consent