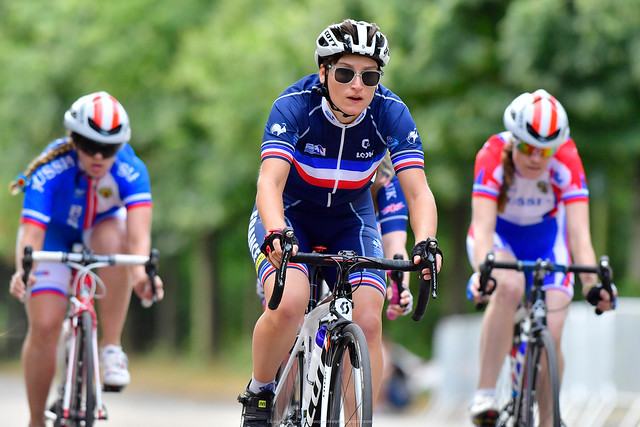 The Global Games are the world’s biggest high performance sports event for athletes with an intellectual impairment and will double-up as the World Championships for road cycling. The 2019 edition will take place in Brisbane, Australia, from 12-19 October.

Minodier, who won gold in both the time trial and road race in Racice three years ago, followed that up with two silvers in Assen, the Netherlands in 2017, and Paris, France, in 2018.

The French Federation for Adapted Sport (FFSA) has increased investment in her sport, including new training facilities, which has helped make Minodier into one of her country’s best medal hopes.

The French cyclist is currently preparing for Brisbane 2019 with a clear goal in mind: “I want to be champion both in team trial and road race. This competition is wonderful, it really makes us dream.”

The road to Brisbane for Minodier will involve hours of training according to a specific regime created by her coaches: “It will be a tough programme. I am training three times a week and I have a training camp with the French federation every two months. “

The Global Games will be an excellent opportunity for the French cyclist to assess her progress and build on the good results of the last few seasons.

“My world champion’s title at Racice [Czech Republic] in 2016 made me really proud,” Minodier said. “I thought about my family, my boyfriend and all the people I know who supported me. I was really satisfied with the outcome of the last two World Championships as well. In Paris, however, I was more concentrated than in Assen and I had trained better.”

The Global Games are also an opportunity to gather the global athlete community together and it is this which Minodier is excited about: “The best part of these competitions is meeting new people, other athletes and supporters, it is something I really like. It is always funny to gather together in our sport community. We have a strong connection and we try always to communicate between us, despite the linguistic barrier.”

Putting the social aspect aside, Minoder is laser-focused on her goals and says that she never finds it hard to fire herself up:

“The hardest part of my sport is to keep the focus. Sometimes I feel stressed and anxious and it is difficult for me to manage it. Nevertheless, if I stay focused on my goals and I follow my trainer’s instructions, I keep the level of motivation high.

“I just need to pedal, and the motivation switches on. It is as easy as it comes.”

World Intellectual Impairment Sport launch search for Governing Board membe...
Scroll to top
We use cookies on our website to give you the most relevant experience by remembering your preferences and repeat visits. By clicking “Accept”, you consent to the use of ALL the cookies.
Cookie SettingsAccept
Manage consent