Tension building up in the city of Brisbane as the first Virtus Oceania Asia Games 2022 is just three days away. Apart from being the inaugural games for the OA region, here are the top five things which are going to make this multi-sport event even more special-

A workshop for the OA region will be held in Brisbane on 3rd November. The workshop will be delivered by Prof Jan Burns, Head of Eligibility from Virtus and Dr Suzie Lemmey, Classifier for II athletes. The aim of this workshop is to introduce the concepts of eligibility and classification in Parasport and how this works for athletes with intellectual impairment. It will also describe the Paralympic pathways from recreational to elite sport. The workshop will also introduce the roles of a classifier and how to become one.

2. Legacy of INAS Global Games in the medals of OA Games

The Royal Australian Mint produced the OA Games 2022 Medals, continuing their legacy and partnership in growing inclusion through sport. The two sides of the medals tell two different stories. On one side the gum leaves from the Global Games 2019 medals can be seen carrying the legacy of the games (designed by Bronwyn Scottand) and on the other side with the line drawing of the Brisbane River (designed by Aaron Baggio).

The gum blossom signifies resilience and strength in Australia. In times of drought, floods and even the intensity of the harsh Australian sun, the gum blossom stays resilient and strong, with bright and colourful blossoms.

“It is an important feature of the OA Games 2022 Medal to include the inspiration from Australia’s floral icon the Gum Blossom to represent the athletes – their strength, their courage, and their ability to overcome barriers to flourish against the odds,” said Ms Smith.

The International Sports Summit will be held on the 4th and 5th of November Athletics the Brisbane City Hall.  It will bring leaders of the global sports community together in one room to share their insights on how things are done in major international sporting events and talk about the opportunities to join the decade of action towards Brisbane 2032. The three key themes to be focused on during the summit are Sport for Development and Peace, Women in Sport Leadership and Green & Gold Runway to Brisbane 2032 and beyond.

The guest speakers and the panellist for the summit consists of-

Virtus continues to welcome new members to our familyand we are delighted that three will be making their debut at the OA Games: Fiji, Soloman Islands and Maldives. 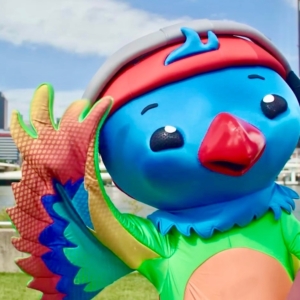 The Global Games 2019 mascot – LORRI will be returning to Brisbane city as the mascot for the 2022 OA Games. Lorri is our favourite inclusion champion and will be flying down from Mt Coot-tha.

Story of Lorri– When Lorri was growing up she played with all the other lorikeets, and as her feathers started to develop, Lorri realised she had a different pattern under her wings and a cool-looking mark on her chest. Refusing to be ‘pigeonholed’ as different, Lorri embraced her individuality and would show off her wings whenever she welcomed people, and her friends all loved it. They actually suit Lorri’s outgoing personality, she has quite the larrikin spirit. Because of her wings, she loves to change people’s perceptions of ‘the different’.

Hélène Parmentier puts light on the struggles Ayemeric on a typical match...

Sport Director for Rowing appointed
Scroll to top
We use cookies on our website to give you the most relevant experience by remembering your preferences and repeat visits. By clicking “Accept”, you consent to the use of ALL the cookies.
Cookie SettingsAccept
Manage consent