Day-7: Another hot, humid and wet evening at Tokyo did not affect multiple World records.

Shabalina claims her third gold medal from Tokyo 2020 Paralympic Games in the women’s 200m Individual Medley. She clocked a time of 2:20.99sec, to beat the former champion Bethany Firth (GBR).

It was a close fight between the two rivals as Bethany finished just 0.03.80sec after Shabalina. Louise Fiddes from GBR claimed her second Paralympic Medal by finishing third with a timing of 2:29.21sec.

“I get more energy from winning” says Shabalina (OIS MC).

In Men’s event, another exhilarating performance, as the leading three swimmers went neck to neck, and in the end, Reece Dunn (GBR) stayed undefeated as he claimed his third Gold from the competition and sets a new World Record with 2:08.02sec.

“Quite excited. I didn’t expect to get a gold in that one, I just wanted to get a medal,” said Dunn

“Obviously, it was a good race. I don’t know how I did that. First 150m was strong, and it was just about hanging on. I knew they would catch me on the breaststroke, I just had to try and pull away in the free and get the job done. I try my best, because the breaststroke is my weak event.”

“I’ve got dodgy knees, can’t kick really well, just got to try and get through the water and give myself the best chance I can at the 150m and see where I am on the freestyle” he told OIS News.

Dunn suffered with posterior shoulder impingement after the 4x100m mixed relays and was heavily fatigued but expressed he was mentally on top notch and was confident going into the races and was not nervous at all.

“I believe no one can beat me and even in my worse events I go into that believing I’m the best,” says Dunn (OIS MC).

Gabriel Bandeira (2:09.56sec) added another Silver to his tally, making a total 4 medals from the tournament. Ukrainian swimmer Vasyl Krainyk won his first medal as he finished third with a timing of 2:09.92sec. It was also his first Paralympic medal. 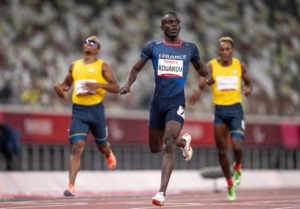 The Men’s 400m finals was another thrilling race as all three winners finished almost at the same time with just micro seconds apart. Charles-Antoine Kouakou (FRA) was extremely happy to win his first medal (47.63sec).

“I am really happy. I did better than my previous performance,” said Kouakou.

He told Virtus, he will celebrate by singing and he is also going to prepare for the Global Games 2023 in Vichy, France, straight after the Tokyo games are over.

“It was my first Paralympic games and I plan to participate in more games in future. It was a great experience and I am going to use that for the next games in the future,” said Blango.

His dad was an Olympian and it was his dream to compete at this level. He believes running was his natural gift and he just took it up and trained hard.

In Women’s 400m finals, defending Paralympian Breanna Clark (USA) created a new World record (55.18sec) and was seen dancing on the tracks for quite some time after the race. Yuliia Shuliar (UKR) claimed the Silver whilst setting a new personal best of 56.18sec.

“I am glad to win the silver and actually I am not bothered about the positions, I am just happy that I am improving my timing,” said Yuliia.

In F20 Men’s Shot put, three athletes Congo Villalba from Ecuador, Hodgetts from Australia and Zolkefli from Malaysia were performing under protest. More information will come from the officials. Maksym Koval (UKR) created a new World record by covering a distance of 17.34m. followed by Yarovyi Oleksandr who set his personal best of 17.30 and Nikolaidis Efstratios from Greece.

PRESS STATEMENT: Athlete support and well-being is paramount.
Scroll to top
We use cookies on our website to give you the most relevant experience by remembering your preferences and repeat visits. By clicking “Accept”, you consent to the use of ALL the cookies.
Cookie SettingsAccept
Manage consent