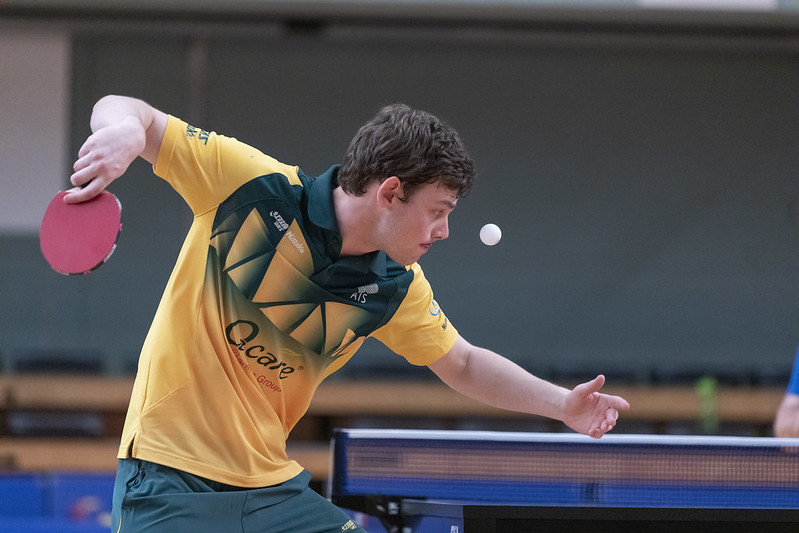 Von Einem enjoyed a great path to the final as he also overcame French world No.3 Lucas Creange 3-1 in the semis.

Creange finished with bronze alongside Japan’s Takeshi Takemori. The Japanese will be pleased with his medal less than one year ahead of the Tokyo 2020 Paralympics.

Day three of swimming delivered a new set of record-breaking performances as athletes in the II1 category prepare for the Tokyo 2020 Paralympic Games.

“I felt much more relaxed than I did this morning. It was a personal best and a Swedish record” – Lindberg said of her medal win.

The men’s 50m butterfly II1 was a fight to the finish between Russian teammates Emeliantsev and Kuliabin (26.40) but it was the former who rose victorious in a Global Games 26.16 record finish.

Muratov took the lead early on, but Spain’s Deliber Rodriguez overtook him on the bend and looked to be streaking away. Out of nowhere Muratov increased his stride on the straight and reeled the Spaniard in, just managing to dip in first in 40.90 seconds – 0.03 ahead of Deliber.

France’s Gloria Agblemagnon won the women’s shot put II1 with a 12.62m second throw. Russia’s Aleksandra Zaitseva was the closest to the Frenchwoman, but her best of 12.57m was only enough for silver. Another French athlete, Aminata Camara (10.66m), was third.

The men’s 200m sprint II3 saw an impressive run from Australia’s Jacob Sesar, the crowd going wild as he crossed the finish line in first place in 22.13. Egypt’s Aly Abdullah came in second with 26.18s.

In the women’s heptathlon II1 Australia’s Ebonie Cooper took home gold with a score of 2364, Virginie Dreux of France came second with 1885, and Australian Belinda Slatter came in third with 1524.

Cooper came in first place in five of the seven heptathlon events, and second in the other two.

“[On] day one I was so nervous thinking that I’m not going to win a medal,” she said. “I got a PB in 100m hurdles, high jump, shot put and javelin. “I felt so proud of myself, I couldn’t stop smiling.”

The moody skies did not dampen the spirits of the athletes competing in today’s Regatta at the Coomera Watersports Club.

Men’s and women’s teams from Australia, Italy, USA, and Portugal donned their slides and zooties, stretched and cleaned their rigs in preparation for the heats and two medal events.

Medals were up for grabs in the mixed double scull.

Headlining the winners were the Australian team of Mac Russell and Julia Story for their amazing effort in the 1,000m race. Silver also went to an Australian team consisting of Stephanie Walker and Aaron Skinner.

Story has had a long rowing career and came out of retirement to represent Australia at the World Intellectual Impairment Sport Global Games. She has previously won world titles and was thrilled to compete again this year. She also placed first in her single women’s scull 500m heat.

Australia’s Mac Russell is the one to watch tomorrow (16 October) as the winner of the men’s 1,000m and 500m single scull heats.

Athletes showcased their training and discipline in taekwondo at the Chandler Theatre on the sport’s official Global Games debut.

The women’s Poomsae P20 over 30 featured a win for Colombian athlete Jhormary Rojas.

Rojas said she trains three times every day and enjoys it but sometimes it gets very tough to keep up with the sport:

“There have been really hard times where we have actually thought about giving up.”

“But even though we have rough times we get through them as a family and now we are here just achieving goals.”

The women’s Poomsae P20 under 30 age group showcased a variety of different techniques and styles of taekwondo.

The Chilean contestant, Martinez Paloma, stood out the most taking home gold with a score of 7.266.

In the men’s under 30 category the Ecuadorian gold medallist, Edison Joel Chiguano Aguilar, showed his sharp and disciplined movements which gave him a winning score of 7.482.

Italy’s Michele Cianciotto secured silver with a score of 7.383. Bronze was taken by Alejandro Gutierrez Rudino representing Mexico and the USA’s Eric Wright.

Mount Cotton Driving Centre was once again the scene for the men’s and women’s cycling as road races got underway.

The course was challenging, featuring short and steep hills with not many opportunities for breaks.

The men were first to start in their 60km race and the difficulty of the circuit showed early with some of the riders struggling to keep the pace a few laps in.

At the halfway mark a group of four began to pull away from the rest of the field.

The riders stayed together for two laps before Surango Tufino decided to make his move and break away on his own.

With five laps to go it was beginning to look like the Ecuadorian’s day as he continued to put space between him and the rest of field.

It then became a battle for the other medals between Broeren and Teixera Pereria with Viera De Carvalho dropping off. The Portuguese cyclist charged hard late closing the gap to less than 20 seconds but fell short of the podium.

Tufino crossed the line first with a time of 1:43:57 followed by Jeremy Teixera Pereria (+4:23) and Nathan Broeren (+4:26) with a tight finish for silver and bronze.

Two laps in British race favourites Lauren Jayne Booth and world title holder Kiera Byland went for their opportunity to take the lead and put as much distance between them and the rest of the field as they could.

They were followed by Russia’s Irina Nikitina and Poland’s Malgorzata Pernal but the pair could not keep pace with the British.

At the halfway mark a Great Britain one-two finish seemed imminent but a tight battle for third was playing out between Nikitina and Pernal. Neither were giving the other any distance between them.

On the last lap Booth (50:51) managed to put enough distance between her and her world champion teammate Byland (+10 seconds) in second. Nikitina (+4:05) closed out the rest of the podium.

Basketball World Championships silver medallists Portugal hold the lead at the top of the men’s standings with an unbeaten record of four wins.

They beat Poland 34-60 on Tuesday for their latest victory.

World champions France were overcome by Australia, 59-46. The hosts sit second in the table with just one loss, whereas the world title holders have only reached one win so far.

In the women’s Australia Gold won both their matches to maintain their own perfect record.

They took on both Japan and Australia Green on Tuesday, reaching scores of 20-17 and 21-4 respectively.

Australia Green played France, clearing their opponents by seven points. France did however take victory in their match against Israel.

Japan currently sit second in the standings ahead of France.

The first medals were contested in tennis on Tuesday as the combined singles II2 finals took place.

The men’s and women’s singles, doubles and mixed doubles II1 will conclude on Wednesday (16 October).

Futsal competition is also still ongoing at Brisbane 2019, with the semi-finals due to take place on Thursday (17 October).

The 2019 Global Games runs until 19 October at venues across Brisbane. Full results can be found here.

Records tumble in the 2019 Global Games
Scroll to top
We use cookies on our website to give you the most relevant experience by remembering your preferences and repeat visits. By clicking “Accept”, you consent to the use of ALL the cookies.
Cookie SettingsAccept
Manage consent