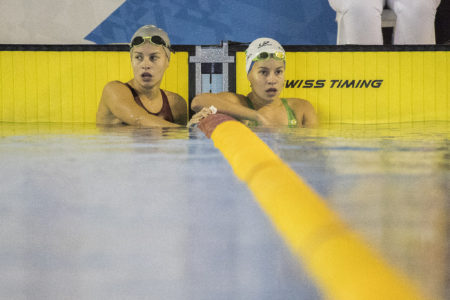 The 19-year-old pair are both swimming for honours as they take on more than 160 other athletes from 20 countries from 27 November – 3 December.

Débora agreed: “I want to go to the podium, win medals and break many records.”

The duo are not the only twins to compete at the highest level in para sport. Hungary’s Bernadett and Illona Biacsi are Paralympic runners in the T20 classification.

Beatriz and Debora both started swimming at the age of 13. They instantly fell in love with the sport and just six years later, Beatriz represented Brazil at her home Paralympic Games at Rio 2016.

The pair confess to a sibling rivalry which pushes them to the limit: “It’s cool! She gives me strength and I give her strength as well. I beat her records and she beats mine…it is an inspiration!” Beatriz said.

For Debora, whilst admitting competing against her sibling makes her nervous, there are just two rivals she keeps an eye on: “The clock and my sister.”

Beatriz and Debora are both targeting the Tokyo 2020 Paralympic Games as the next major milestone in their careers.

But Debora has even higher hopes: “I want to conquer the world!”

The Opening Ceremony takes place on 28 November before competition starts on 29 November.

The Championships will also be the first to feature new trial eligibility groups for Down syndrome and autism.

France and Australia Gold continue winning form at basketball Worlds Mills top scorer as Australia Gold take Worlds victory
Scroll to top
We use cookies on our website to give you the most relevant experience by remembering your preferences and repeat visits. By clicking “Accept”, you consent to the use of ALL the cookies.
Cookie SettingsAccept
Manage consent