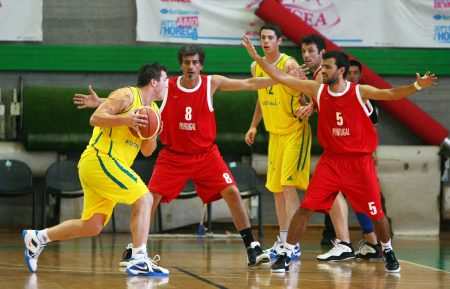 The team has had a great preparation with a tour to Japan as well as national competitions. They played at the Ivor Burge Championships in Bendigo and the 2017 Queens Birthday Long Weekend Tournament in Melbourne along with several training camps.

“This time together has been invaluable for the team, both in allowing players to gel as a team and for the coaches to appreciate the players strengths and combinations,” said head coach Simon Robinson.

De La Motte stood out at the Ivor Burge Championships whilst Myers and Pace impressed with outstanding performances at the 2017 Queens Birthday tournament and the 2016 tour of Japan. Littleton’s size and strength will come in handy against the larger European teams.

“There is a good blend of experience and youth in the team and after just missing out on a medal in Ecuador [at the 2015 Global Games] they will be keen to go one better this tournament,” said Robinson.

While the Boomerangs are currently ranked sixth in the world they are never far from the medals. They have reached the medal round in half of the Championship tournaments since 1992, winning bronze in Portugal in 1996 and Turkey in 2013.

The women’s team has also been announced.

Tri-Nations to get underway with England v South Africa

World Intellectual Impairment Sport congratulates Andrew Parsons on election... Defending champ Pinheiro assesses inside threat
Scroll to top
We use cookies on our website to give you the most relevant experience by remembering your preferences and repeat visits. By clicking “Accept”, you consent to the use of ALL the cookies.
Cookie SettingsAccept
Manage consent