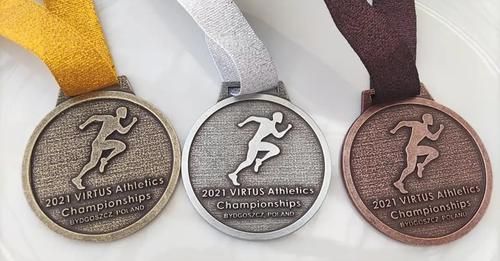 The 2021 Virtus World Athletics Championships have closed with 3 new World Records set including France’s Beatrice Aoustin who broke her own WR throwing 50.51 in the Hammer.

Competing on home soil, Karolina Kucharczyk jumped a Virtus record of 2.54m in the Triple Jump, whilst also taking a new record in the 100m Hurdles, finishing in 14.37.

The event was the largest to be held by Virtus under the new Covid protocols. All participants were tested ahead of arrival in Poland, and again mid-way, before a final test ahead of departure. All covid tests were negative.

Virtus would like to thank hosts Sprawni-Razem for their efforts in the difficult circumstances that exist and all the nations and teams that supported the event. Jose Costa Perreira, Sport Director – Athletics, said ” With 10 nations and more than 100 athletes, this was a smaller event than we are used to but was a huge success given the barriers many nations face. Congratulations to our Polish hosts who delivered a fantastic event, live-streamed to the world”.

Full results can be found here.

Seefeld – Austria to host 2022 World Skiing Championships
Scroll to top
We use cookies on our website to give you the most relevant experience by remembering your preferences and repeat visits. By clicking “Accept”, you consent to the use of ALL the cookies.
Cookie SettingsAccept
Manage consent