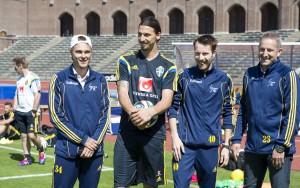 Sweden will compete in the Inas Football World Cup this summer in Sao Paulo, Brazil, thanks to the support of Swedish national team captain Zlatan Ibrahimović.

“When I heard the story about the Swedish learning disabilities national team (or The Unknown Swedes as they call themselves), I decided to make sure they would experience something that has eluded me, namely a World Cup in Brazil!”

By finishing fifth in the 2012 European Championships, which were held on home soil in Gavle, the Swedish national team for players with an intellectual disability qualified for the 2014 Inas Football World Cup.

However, the success of qualifying was immediately followed by the challenge of financing the adventure. The team manager, Stefan Jonsson, together with Torbjörn Östergren, is the driving force behind the team. “The chance of competing in a World Cup in Brazil is too good an opportunity to miss, but we are called The Unknown Swedes for a reason,” Jonsson explains. “Our team rarely, if ever, get any recognition and we are always struggling to survive financially. We speak regularly with the founder of the now internationally renowned Glada Hudik (aka Happy Hudik) theatre, Pär Johansson, and are grateful for all the support and advice we get from him and others, but they cannot solve all of our problems. 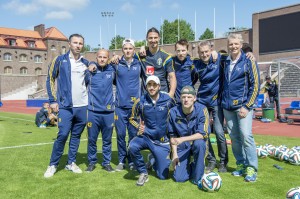 “One of the fundraising activities we decided to arrange to raise money to offset the extra costs involved in competing in a World Cup was an auction of football memorabilia. Several players from the Swedish national team, including Andreas Isaksson, Per Nilsson, Johan Elmander and Kim Källström, contributed immediately with signed football boots and shirts.”

When Zlatan was asked by Paul Balsom, one of the national teams coaches, if he could contribute to the auction, he immediately replied: “Tell The Unknown Swedes that I can guarantee that they will be going to Brazil.”

Zlatan explains: “Football is a game for everyone, with or without any form of disability. When we failed to qualify for the 2014 FIFA World Cup in Brazil, I was deeply disappointed, but when I heard about The Unknown Swedes I said to myself that I would do all that I could to help them experience their own World Cup in Brazil. It was as simple as that. Now, at least, I can experience a World Cup in Brazil through them.”

Jonsson is delighted, if a little overwhelmed: “It’s unbelievable, incredible, fantastic. I still have to pinch myself to believe it’s true. Thanks to Zlatan a life-long dream will soon become reality for all of us involved.”

2015 Australian Tennis Championships Official launch of 2015 Inas Global Games
Scroll to top
We use cookies on our website to give you the most relevant experience by remembering your preferences and repeat visits. By clicking “Accept”, you consent to the use of ALL the cookies.
Cookie SettingsAccept
Manage consent