Gabriel Bandeira is a Paralympic Champion from Brazil. Gabriel made his Paralympics debut at the Tokyo 2020 Paralympic Games and won – 1 Gold medal in 100m butterfly (with Paralympic record), two Silver medals in 200m freestyle and 200m medley (America’s record) and one Bronze medal in 4x100m freestyle relay (America’s record). While athletes usually compete at the World Championships and use the lessons learnt from the event to compete at the biggest Para-sporting event-Paralympics. However, Bandeira did the exact opposite. Bandeira competed at his first World Championship in Madeira 2022, after competing at the Paralympic first in 2020, and won three gold, one silver and two bronze with better timings using the knowledge gained from the Paralympics. 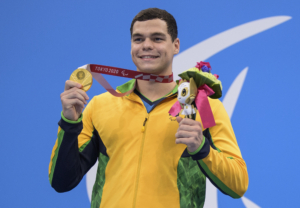 It may be surprising to know that the Paralympian was actually training to compete in the Olympic Games until he was diagnosed with intellectual impairment. Gabriel had a very happy childhood with supporting parents who never made him feel he had an intellectual impairment. When his friends and coaches mentioned to him that he might have an impairment and that he should get a diagnostic test done, Gabriel refused it twice because he never felt he was different as it was his ‘normal’. Later in 2018, Gabriel finally agreed to get his test done and was given his eligibility class. Bandeira had a smooth transfer to the Paralympic movement.

“I felt embraced by the Paralympic Movement. It was a very peaceful and light process. I felt like I really could be myself. While I was training with the Olympic athletes, the coach gave the same instructions to the whole team and everybody followed them. But, in the Paralympics training, the coach pays attention to each swimmer according to their impairment. For example, he prints my training so that I don’t struggle with memorising it, he explains it carefully and depending on the situation he knows how to talk to me. When he gives constructive feedback to me, it takes me some time to process it and I can also be aggressive or very sad about it, and the coach stays very calm and patient with me the whole time whilst motivating me until I understand my fault so I do not drop my performance during the session and to improve it instead.”

Bandeira believes there could be others like him who are not aware of having an intellectual impairment, and who want to compete in high-level sports but are unable to do so because they might not receive the proper guidance as per their impairment-specific needs. Bandeira wants to advocate for intellectual impairment and increase awareness about Paralympic sports for those who want to compete.

Finance Committee member needed (voluntary)
Scroll to top
We use cookies on our website to give you the most relevant experience by remembering your preferences and repeat visits. By clicking “Accept”, you consent to the use of ALL the cookies.
Cookie SettingsAccept
Manage consent