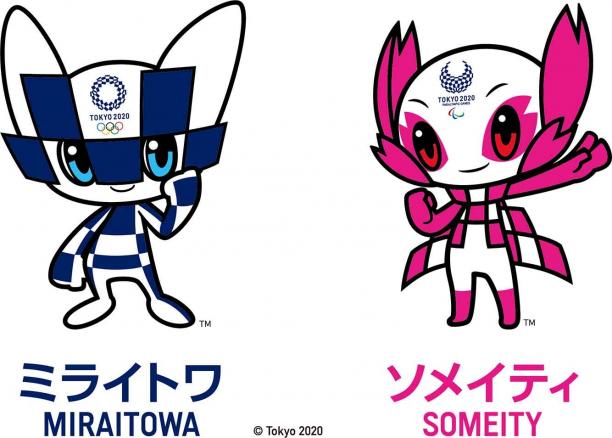 The mascots of both the Olympic and Paralympic Games Tokyo 2020 greeted the Japanese public for the first time at their naming ceremony on Sunday (22 July). Thousands of children and adults joined meet and greet events across the Japanese capital to welcome the new ambassadors of the Tokyo 2020 Games.

Origin of their names

The Tokyo 2020 Paralympic mascot’s name was revealed as Someity, (pronounced soh-may-tee) which comes from someiyoshino, a popular cherry blossom variety, and additionally echoes the English phrase “so mighty”. Someity has tactile cherry blossom sensors and exhibits enormous mental and physical strength. It represents Paralympic athletes who overcome obstacles and redefine the boundaries of what is possible.

The Tokyo 2020 Olympic mascot’s name was revealed as Miraitowa (pronounced mee-rah-e-toh-wa), based on the Japanese words mirai (future) and towa (eternity) combined. This name was chosen to promote a future full of eternal hope in the hearts of people all over the world.

Someity is a cool character with cherry blossom tactile sensors and super powers. It can send and receive messages telepathically using the cherry blossom antennae on both sides of its face. It can also fly using its ichimatsu-pattern cloak. It is usually quiet, but it can exhibit great power when necessary. It embodies Paralympic athletes that demonstrate superhuman power. Someity has a dignified inner strength and it also loves nature. It can talk to stones and wind by using its super power, and is also able to move things by just looking at them.

Miraitowa has the same indigo blue ichimatsu-patterns as the Tokyo 2020 Games Emblem on its head and body. The mascot’s personality is derived from a traditional Japanese proverb that means to learn old things well and to acquire new knowledge from them. The mascot has both an old-fashioned aspect that respects tradition and an innovative aspect that is in tune with cutting-edge information . It has a strong sense of justice, and is very athletic. The mascot has the special ability to move anywhere instantly.

The duo finally made their debut on Sunday and are already anticipating a busy schedule ahead.

Between December 2017 and February 2018, more than 75 per cent of the elementary schools in Japan and a number of overseas Japanese schools took part in a selection process and voted for their favourite set of mascot designs.

Miraitowa and Someity live in the digital world, and can move freely between there and the real world via the internet.

Paris 2018: 14 records broken
Scroll to top
We use cookies on our website to give you the most relevant experience by remembering your preferences and repeat visits. By clicking “Accept”, you consent to the use of ALL the cookies.
Cookie SettingsAccept
Manage consent