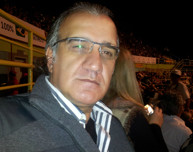 Jose Amaury Russo of Brazil has been elected the new President of Inas – the International Federation for sport for athletes with an intellectual disability within the Paralympic movement has confirmed – a role he will take with immediate effect.

He becomes Inas’ first President to be elected from outside of Europe in its 26 year history and will lead the organisation as it builds towards the Paralympic Games in Rio in 2016.

Russo, 59, was declared the winner in a close election contest with UK nominee Dr Geoff Smedley. He has more than 30 years experience in disability sport, including holding positions with the Brazilian Paralympic Committee and ABDEM (the Brazilian member organisation of Inas) and is a Director of ‘Piquesporte’ – a health and fitness facility in Sao Paolo.

As the results were announced he led a number of emotional tributes to former President Dr Bob Price OBE, who steps down after 6 years at the organisations helm. “You have led Inas through some difficult times and achieved so much. I will work hard to build on that success and behalf of all Inas athletes, I wish you well in your retirement”.

Further tributes were paid to Bengt Lindstedt (Sweden) and Michel Chopinaud (France) who also stepped down at this election.

2013 Inas Conference & General Assembly 2014 Inas World Cycling Championships
Scroll to top
We use cookies on our website to give you the most relevant experience by remembering your preferences and repeat visits. By clicking “Accept”, you consent to the use of ALL the cookies.
Cookie SettingsAccept
Manage consent