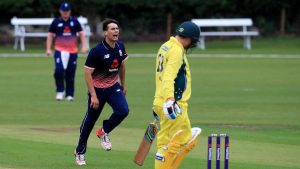 By England and Wales Cricket Board

The second match of the World Intellectual Impairment Sport Tri-Nations between England and Australia was lost to the weather at Grappenhall Cricket Club in Cheshire, Great Britain, on Tuesday (11 July), with just 21 overs possible on a frustrating day.

It was enough time though for England’s Alex Jervis, the 22-year-old seamer from Clumber Park in Nottinghamshire who represents Yorkshire, to follow up his five for 46 against South Africa from Monday (10 July) with a mightily impressive three for 19 from his five overs.

That display helped England restrict Australia to 110-4 from the 21 overs. But Australian captain and opener Gavan Hicks had provided a hint of his talents, making 36 from 43 balls before being sensationally caught by Lee Stenning – the highlight of the play that was possible.

An early lunch was called at 1.35pm, when the third spell of light rain arrived, but that rain became torrential during the interval and play was abandoned at 2.24pm. Both teams took a point.

All matches in the 40-over and T20 tournament are being played at grounds across Cheshire.

Speaking after the match was abandoned, England captain Chris Edwards said: “Weather unfortunately beat us, which is a bit frustrating because we were making good inroads and fighting back well. First 20 overs I thought we bowled well early doors, contained them fairly well.

“It was wet from overnight rain but it was firm and the wicket played true and well.

“A win yesterday [Monday] was very important for us. To not get any result out of today means it will be very interesting going in to Thursday and Friday. Also how tomorrow’s [Wednesday] result pans out as well.

“For us it’s about working hard now on Thursday and Friday and using that energy we could perhaps have used today.

“Australia look very good batting at the top of the order. They got off to a really good start. We had some opportunities that didn’t quite go to hand but we pushed back well against them.”

Edwards was also full of praise for seamer Jervis: “He’s hungry for wickets. He’s got that enthusiasm that rubs off on the rest of the team. That self belief and determination he’s worked so hard for and it’s starting to pay rewards in these first two games.”

Australia skipper Hicks said: “It is frustrating. The first few days we were here were absolutely glorious and now we try to play cricket and it’s a completely different matter. But you can’t control the weather.

“It was very competitive. Good wicket, the ground was quick enough even with the rain on it. It would have been a pretty good match if it had gone ahead.

“It was nice to have a hit and get used to English conditions and the way the pitches are a bit different to home. It was nice to get a few in the middle, unfortunately got out and the weather set in.

“England are very disciplined in the way that they go with their bowling. They set very straight fields and make you make the mistakes. Very good batting order too, especially their top four. It’s always a good battle against them and I’m looking forward to the next match.

“We’ll certainly be wary of Alex Jervis next time we play them.

“We played a practice match against South Africa. They’ve had five guys from a previous tournament so it was good to face them again. You never know what you’re going to get, they’re athletes and it should be a good game tomorrow.”

The 2017 World Intellectual Impairment Sport Tri-Nations features a series of 40-over and T20 games between hosts England, Australia and South Africa. Matches are being played at grounds across Cheshire until 21 July.

Live scoring is available throughout at the England and Wales Cricket Board website.

Jervis stars for England in cricket Tri-Nations opening win World Intellectual Impairment Sport launches search for sponsorship and fundraising...
Scroll to top
We use cookies on our website to give you the most relevant experience by remembering your preferences and repeat visits. By clicking “Accept”, you consent to the use of ALL the cookies.
Cookie SettingsAccept
Manage consent