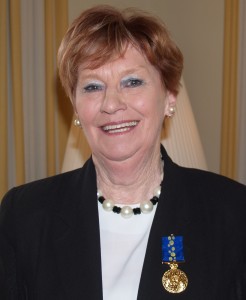 It is with great sadness that Inas has learnt that former Executive Committee member and former President of the Inas Asia/South Pacific region, Marie Little OAM, passed away over the weekend following a short illness.

Marie was one of the founding figures in Inas and a passionate advocate of sport for people with an intellectual disability.

In addition to her commitment to Inas, she also served on the Board of the Australia Paralympic Committee – latterly as President – and was a member of the Sydney Paralympic Organising Committee ahead of the 2000 Games. Her lasting legacy in Australia is AUSRAPID – the Australian Sport and Recreation Association for People with an Intellectual Disability, founded in 1986, of which she was President until her retirement in 2011.

Internationally, Marie was the first female member of the Executive Committee of the International Paralympic Committee.

Robyn Smith, Inas Vice President and CEO of AUSRAPID has paid tribute to Marie. “In my position with AUSRAPID during the past 20 years, I have not met anyone with her enthusiasm, commitment and determination to improve the lives of those with an intellectual disability – through involvement in quality sporting and recreational pursuits”.

Wayne Bird, who succeeded Marie as President of the Oceania region “The success of Mrs Little’s work is evident throughout Australia and her vision has been a revelation to the development of sport for people with a disability in this country and throughout the world.   She has been the inspiration behind Ausrapid”.

Marie Little received an Order of Australia Medal in 2006 as a pioneer in Australia and overseas for her work advocating and assisting the lives of people with an intellectual disability through sport.

On behalf of its athletes, member organisations, staff and Board members, Inas would like to extend its deepest condolences to Marie’s family… but also a message of thanks and appreciation for everything that Marie did and achieved both for the organisation and for sport for athletes with an intellectual disability in Australia and worldwide during an outstanding career.

2015 Inas Conference and General Assembly South Africa and Poland lead after group stages at Inas Football World Cup
Scroll to top
We use cookies on our website to give you the most relevant experience by remembering your preferences and repeat visits. By clicking “Accept”, you consent to the use of ALL the cookies.
Cookie SettingsAccept
Manage consent