On behalf of the World Intellectual Impairment Sport organisation, we would like to wish all supporters a very happy festive period and our best wishes for the year ahead.

The organisation has come a long way since then – sometimes overcoming very difficult circumstances – but always supporting and encouraging athletes with an intellectual disability from across the world to be their best in sport.

2015 was no different. As the world governing body for sport for athletes with an intellectual disability, World Intellectual Impairment Sport organised events including:

And the competition calendar culminated in the 4th World Intellectual Impairment Sport GLOBAL GAMES (Ecuador) which, despite the difficulties we encountered, saw some incredible performances from the more than 600 athletes and 33 nations who participated.

Fundraising continues to be our biggest challenge, but we were delighted to work with key supporters including Morrison Insurance Solutions, Irwin Mitchell Solicitors, WGT Travel, The Baily Thomas Charitable Trust, Sylvia Adams Charitable Trust & The Disability Sports Development Trust. We also welcomed Kevin Elliott, Steve Kitchman and Antony Davies who became the first three members to a new Fundraising Advisory Board. In addition we recently heard we have won a grant as part of the Starbuck’s #RedCupCheer Campaign and are delighted to hear also that we have been chosen as JCI Sheffield’s Charity of the Year for 2016. 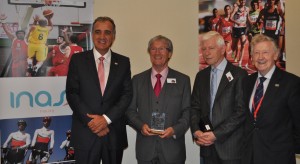 Looking ahead to 2016, World Intellectual Impairment Sport will launch new regional competitions in Asia and in Africa as well as organising more than 14 world and continental championships and of course the Paralympic Games in Rio De Janeiro. And we hope that you will join us as we celebrate 30 years of World Intellectual Impairment Sport in April at a very special event being held in New York (details of the event will be available early in 2016).

We very much hope that you will continue to support us as we strive to reach more athletes, in more nations and in more sports.

As the festive period approaches, from everyone at World Intellectual Impairment Sport, thank you for supporting us in 2015, and our very best wishes for the year ahead.

Leon Trimmingham becomes 3rd World Intellectual Impairment Sport Ambassador 2016 WADA Prohibited List Comes Into Force
Scroll to top
We use cookies on our website to give you the most relevant experience by remembering your preferences and repeat visits. By clicking “Accept”, you consent to the use of ALL the cookies.
Cookie SettingsAccept
Manage consent