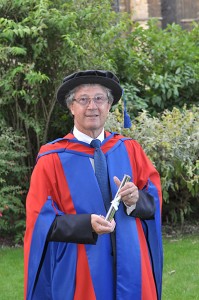 Earlier this week, the University of Lincoln paid tribute to the Inas President Dr Bob Price OBE, when it awarded an Honorary Doctorate of Science to recognise a lifetime of dedication to the disability sport movement.

The graduation ceremony took place on Tuesday evening (4th September) at Lincoln Cathedral and recognised a distinguished career spanning 40 years improving the lives of people with a disability through sport.

Dr Price is currently the President of Inas – the International Sports Federation for Para-athletes with an Intellectual Disability – and was previously President of both British and European Paralympic Committees. He was Chef De Mission for the Great Britain team to five Summer Paralympic Games between 1984 and 2000.

It was fitting that the ceremony took place during the 2012 Paralympic Games, in which athletes with an intellectual disability compete for the first time in 12 years. Following problems relating to the classification of athletes in Sydney 2000, Dr Price led Inas’ work with organisations including the International Paralympic Committee and others to ensure their re-inclusion in time for the London Games.

In April, Dr Price retired as the Chief Executive of Linkage Community Trust – a national charity based in Lincolnshire – which delivers high-quality specialist education, care and employment support services to people with a learning disability.

Dr Price was awarded an OBE for services to sport for the disabled in 1993 and in 1996 he received a further honour, the Paralympic Order. The Paralympic Order is the highest accolade a person can receive in connection with the movement. It honours someone who has exemplified the Paralympic ideals through their actions.

2012 page launched 2012 World Cycling Championships
Scroll to top
We use cookies on our website to give you the most relevant experience by remembering your preferences and repeat visits. By clicking “Accept”, you consent to the use of ALL the cookies.
Cookie SettingsAccept
Manage consent