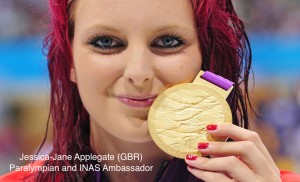 World Intellectual Impairment Sport is delighted to announce that Great British international para-swimmer, Jessica-Jane Applegate MBE, has agreed to become an ambassador for the organisation.

Jessica-Jane is an international GB para-swimmer who competes in the S14 (intellectual disability) classification. Her rapid progress to success started in 2011 when, aged 15, she won bronze in the 50m freestyle competition at the British International Disability Championships. Twelve months later she was selected for the London 2012 Paralympic Games – where she won gold for the 200m freestyle event in a new Paralympic and British record.

As Great Britain’s only gold-medallist in the S14 classification at the Games, Jessica was awarded an MBE in the 2013 New Year Honours for services to swimming. Jessica-Jane has continued to build on this success – accumulating more than 75 new British Swimming records and recently being awarded ‘Para-athlete of the Year’ at the 2015 British Swimming Awards.

Speaking about her new role, Jessica-Jane said: “I am very excited to become an Ambassador for World Intellectual Impairment Sport. World Intellectual Impairment Sport make it possible for people with an intellectual disability to be able to compete at an international level. They open up the pathway to enable athletes like myself to compete on the international stage against the best ID athletes in the world. I have no doubt this has helped me become the paralympic athlete I am today. I also think it is very important to support everyone that supports you. Their work as a charity is massively important to athletes at every level. Please join me in supporting them.”

Inaugural Global ID Sports Week set for June 2016 3 x Olympian Andy Turner becomes latest World Intellectual Impairment Sport...
Scroll to top
We use cookies on our website to give you the most relevant experience by remembering your preferences and repeat visits. By clicking “Accept”, you consent to the use of ALL the cookies.
Cookie SettingsAccept
Manage consent