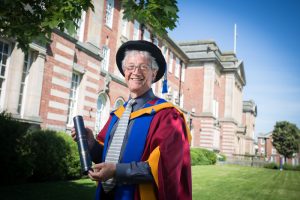 Dr Price started his career as a physical education teacher for children with severe physical impairments, before moving on to become head of delegation to the Great Britain team in five consecutive Paralympic Games.

His subsequent roles as Chairman of the British Paralympic Association, President of the European Paralympic Committee and more recently World Intellectual Impairment Sport have seen unprecedented achievements in para-sport.

Dr Price has campaigned throughout his four-decade career for the equal promotion of impairment groups within the Paralympics. However, when athletes with intellectual impairments were excluded from future Paralympic Games after Sydney 2000, Dr Price was encouraged to intervene directly, by accepting the World Intellectual Impairment Sport presidency and working with the International Paralympic Committee for their re-inclusion from London 2012.

Speaking about receiving his honorary degree, Dr Price said: “Receiving an honorary degree from any institution is a cause for gratitude and receiving one from Leeds Beckett University has a special and added significance because it was on this campus that I first began as an undergraduate more than 50 years ago. There is a real sense of circularity associated with the fact that 50-odd years later the same institution has asked me back to a graduation ceremony.”

In 1993 he was awarded an OBE for services to sport and people with impairments, and gained membership of the Paralympic Order in 2006.

Offering advice to this year’s graduates, Dr Price said: “What I would suggest to all of today’s young graduates is that they seize whatever opportunity comes before them. You never really know what’s around the corner in your career; but, unfortunately, I’ve come across too many people who, too late in life, think back to opportunities that they could’ve taken but didn’t. I would say to anybody graduating today, at the other end of their career: whatever opportunity comes along, grasp it eagerly, work at it, work with it and, almost certainly, it will lead you somewhere else every bit as exciting. Don’t let them go by!”

Dr Price was awarded an Honorary Doctorate of Sport Science on Friday (28 July), for his global services to para-sport.

“His success leaves a lasting legacy for all athletes with an intellectual disability across the world, and shows our students just what can be achieved with the grounding of a degree from our university and the ‘can do’ attitude of a truly inspirational campaigner. He has worked tirelessly for the inclusion of Paralympic athletes, and we are extremely proud to call him an alumnus of the university and now an honorary doctorate.”

France’s Pereira targets cycling world title defence World’s best cyclists ready to take on World Championships
Scroll to top
We use cookies on our website to give you the most relevant experience by remembering your preferences and repeat visits. By clicking “Accept”, you consent to the use of ALL the cookies.
Cookie SettingsAccept
Manage consent