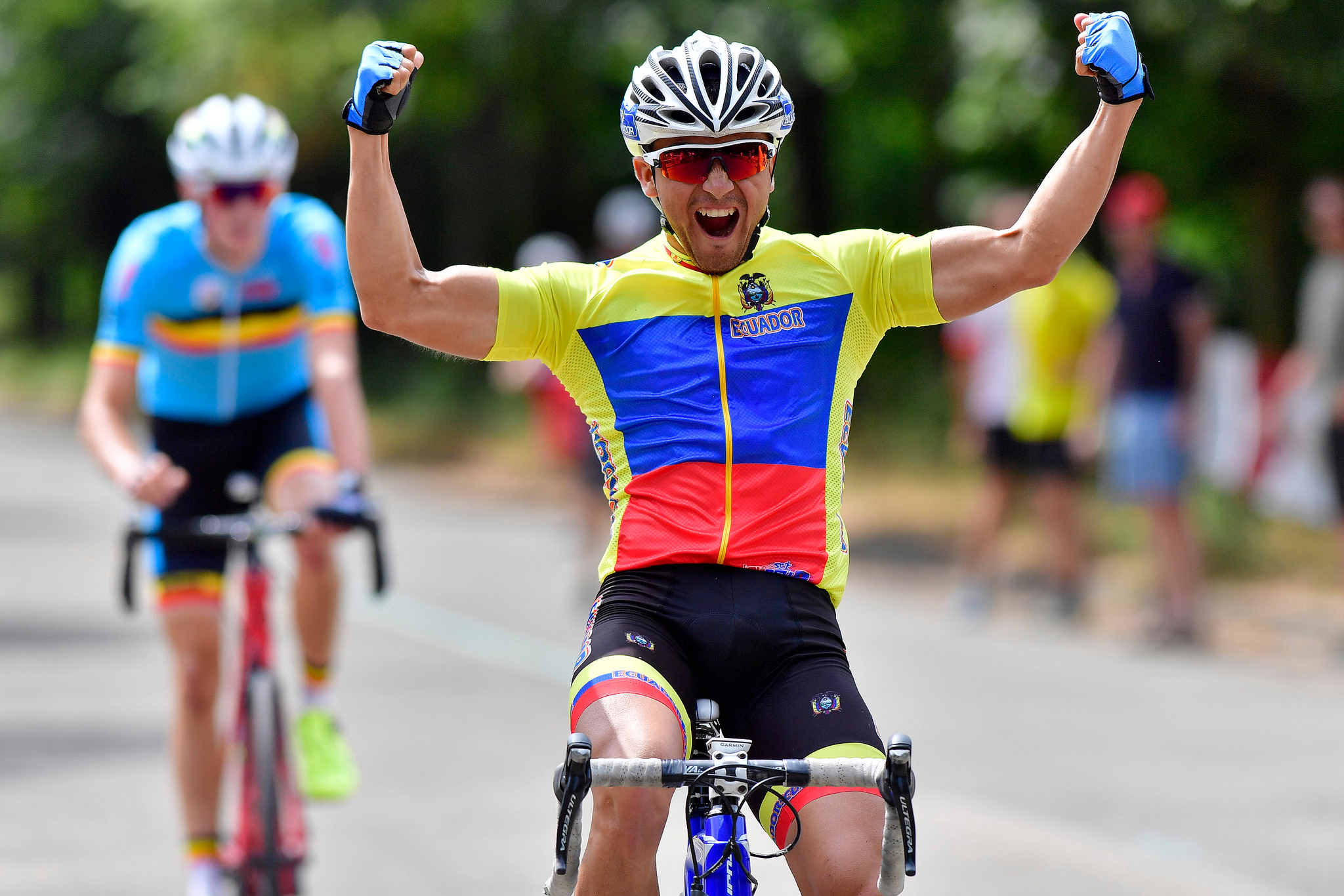 Having picked up silver in the time trial 24 hours before, Sarango Tufino (01:59:22) faced down Belgium’s defending champion Lars de Jong for gold.

A highly tactical race saw the peloton stick together for most of the 60km course. However with a few laps to go, the Ecuadorian and de Jong made their move off the front.

They spent the final stages swapping positions and there was little to separate the pair, even going into the final lap.

The crowds were treated to a blistering race to the line before Sanrago Tufino finally put just a few metres between him and de Jong to take his first world title and leave the Belgian with silver.

“It feels really good. I am really happy. This is for my family, my coach, my friends in Ecuador, for the country,” Sarango Tufino said, going on to describe the race as “really hard”.

There was also a close fight for the final podium spot. The Netherlands Joannathan Duinkerke gave everything he had to beat France’s 2016 world champion Jeremy Texeira Pereira to the bronze.

It was another close race right until the final two laps. Byland described how she won her second gold in two days with a technique normally used in track cycling – rushing a gap:

“One plan was for me to attack on the last lap, but I thought that would be too predictable as that’s what I did last time [at the 2017 World Championships].

“The second plan was that with two laps to go, there’s a bit of incline, so I decided to attack there because I knew that’s where riders don’t really like it, they tend to slow down a lot. So if I can attack there, then they won’t be expecting it

“I tried that technique [rushing a gap] and then when I was ahead, I looked over my shoulder to make sure no one was behind me at that point and then I carried on and I time-trialled it like I did yesterday. It was really, really difficult. Each rider was doing different techniques so you had to concentrate and be aware of what other riders around you were doing.”

“I’m really excited to be able to do that. I knew it was going to be challenging because we’ve got some really strong riders here that we always use different techniques to see if we can try and win with it. So it’s really exciting for me.”

Cyclists will now have a day off before closing competition on Thursday (19 July) with the team time trial.

Paris is also playing host to the 2018 World Intellectual Impairment Sport Tennis World Championships. Round robin matches for the singles and doubles continued on Tuesday.

The world no.1 pairing of Fabrice Higgins and Dominic Iannotti of Great Britain took on the Czech Republic’s Josef Hus and Jakub Jerhot in the men’s doubles, winning 6-0.

Graham and Wren went onto triumph over French duo Benjamin Coulier and Delvas 6-3 to secure a place in the semi-final.

They will now face Ianotti and partner Anna McBride for a place in the final. Australia’s Mitchell James and Lenarduzzi will play Belgium’s women’s singles world champion Hanne Lavreyson and Jochen Fens.

Byland and de Jong golden at 2018 World Intellectual Impairment Sport Cycling... France celebrate team time trial gold at close of 2018 World Intellectual Impairment...
Scroll to top
We use cookies on our website to give you the most relevant experience by remembering your preferences and repeat visits. By clicking “Accept”, you consent to the use of ALL the cookies.
Cookie SettingsAccept
Manage consent