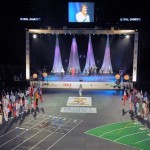 Inas, the International Federation for sport for athletes with an intellectual disability, has chosen Guayaquil, Ecuador to host the 4th Inas Global Games.

The Games – a week long championship featuring eight sports – is expected to attract more than 1000 of the Worlds elite athlete athletes with an intellectual disability. The opening ceremony will take place on 20th September 2015.

It is the first time the event will have been held outside of Europe, following Sweden, Czech Republic and Italy who have hosted the prestigious event in the past and will take place just a year before the 2016 Paralympic Games in Brazil.

Ecuador was chosen ahead of Croatia and Colombia, in a closely fought bidding contest.

Nick Parr, Executive Director at Inas applauded all three bidding nations “The Global Games are the pinnacle event in the Inas calendar and we received three excellent bids. The Governing Board faced a difficult task finding the winner and I would like to congratulate everybody involved in the Ecuador bid on their success – Inas looks forward to a fantastic event in a little over two years time”.

Juan Carlos Araujo, President of Primos Y Primas, the host organisation, was delighted to win the bidding contest “I appreciate the trust Inas has placed in order for Ecuador to become the winning host. We are going to make the 2015 Inas Global Games the most beautiful and successful event ever!”.

The Inas Global Games features World Championship competition in eight sports – athletics, swimming, table tennis, rowing, basketball, futsal, tennis and cycling. A decision regarding the inclusion of any demonstration sports will be taken shortly.
Taking place just a year ahead of the Paralympic Games in 2016, it will be a fantastic opportunity for athletes aiming for qualification to Rio.

GB claim historic medal haul at World Intellectual Impairment Sport World Tennis... Australian twins selected to Inas Basketball World Championships
Scroll to top
We use cookies on our website to give you the most relevant experience by remembering your preferences and repeat visits. By clicking “Accept”, you consent to the use of ALL the cookies.
Cookie SettingsAccept
Manage consent