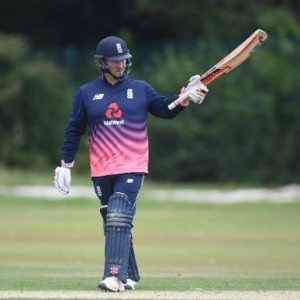 By England and Wales Cricket Board

The England Learning Disability side have qualified for the 40 over final of the World Intellectual Impairment Sport Tri-Series supported by NatWest after a 224 run victory over South Africa.

After England posted an imposing total of 316-3 South Africa could only muster 92 in reply.

After losing the toss and being put into bat, skipper Chris Edwards and Jonny Gale built an excellent platform with an opening stand of 109. After Gale fell for 41, Dan Bowser took control with an extraordinary innings of 108 from 56 balls.

Bowser hit eight sixes as he moved from 50 to 100 in only 12 balls. Edwards fell ten short of his century after being caught at midwicket for 90 but Ronnie Jackson provided able support to Bowser with a quick-fire 40*.

South Africa’s reply got off to the worst possible start as Tayler Young removed Phaphama Mthana for a second ball duck in the first over. A run out and a second wicket for Young saw South Africa slump to 27-3.

In-form Edrich George (38) attempted to launch a fightback but saw wickets regularly fall around him. Edwards (4-12) picked up three wickets in his first over to leave South Africa with little hope of reaching their target.

They were eventually dismissed for 92 with Young finishing with 3-49.

For a full match report head to www.ecb.co.uk