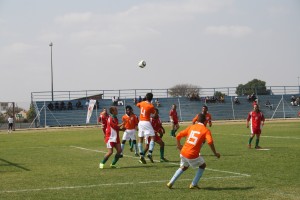 The Championships, held every four years, has traditionally followed the FIFA World Cup with the previous editions being held in Brazil and South Africa.  However in an effort for the event to have its own identity and profile World Intellectual Impairment Sport elected to open bidding in line with its other major championships.

The Championships, to be held in August 2018, will be organised by the Swedish Parasport Federation and Swedish Paralympic Committee in the cities of Karlstad, Arvika and Kil located in the region of Värmland.

The Organising Committee hope that by hosting the event it will not only strengthen the relationship with the Swedish Football Association but also act as a catalyst to recruiting more players with an intellectual disability to compete at a higher level​.​

The 2014 edition saw 8 teams compete from 4 regions, but the 2018 World Championships is set to expand to accommodate up to 12 teams.  Hosts Sweden will automatically have a place in the tournament, along with 2014 World Champions Saudi Arabia confirming acceptance of their place following their victory over South Africa in the 2014 final.

Teams from across Europe will compete this September in Paris in the 2016 World Intellectual Impairment Sport European Football Championships, with qualification spots up for grabs for the 2018 event.  World Intellectual Impairment Sport is working hard with its other regional associations to deliver Regional Championship events in the Americas, Asia/Oceania and Africa in 2017 providing a formal qualification route for the World Championships.  This will be a major milestone in the development of the sport with only Europe having previously held regional championships.

Celebrating World Intellectual Impairment Sport’ 30th Anniversary Switzerland become latest World Intellectual Impairment Sport Member Organi...
Scroll to top
We use cookies on our website to give you the most relevant experience by remembering your preferences and repeat visits. By clicking “Accept”, you consent to the use of ALL the cookies.
Cookie SettingsAccept
Manage consent