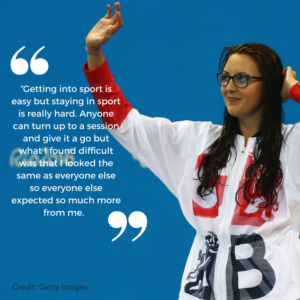 Jessica-Jane Applegate MBE is an international GB para-swimmer. She competes in the S14 category for athletes with an intellectual disability and is the only Great British Gold Medal S14 Paralympian, after winning Gold in the 200m freestyle event at the London 2012 Paralympics at just 16 years old.

She was awarded an MBE in the 2013 New Year Honours for services to swimming.

In the few years, Jessica-Jane has set over 80 new British Swimming records, several World & European Records, won Gold in the 2015 IPC World Championships for S14 100m Backstroke amongst numerous other medal-winning achievements & most recently was awarded ‘Para-athlete of the Year’ at the 2015 British Swimming Awards.

Jessica-Jane added the first Commonwealth medal to her collection recently by winning a Silver at the Birmingham 2022.

“I am very excited to continue my role as an Ambassador for Virtus World Intellectual Impairment Sport. Virtus makes it possible for people with intellectual disabilities to be able to compete at an international level. They open up the pathway to enable athletes like myself to compete on the international stage against the best ID athletes in the world. I have no doubt this has helped me become the Paralympic athlete I am today. I also think it is very important to support everyone that supports you. Their work as a charity is massively important to athletes at every level.”